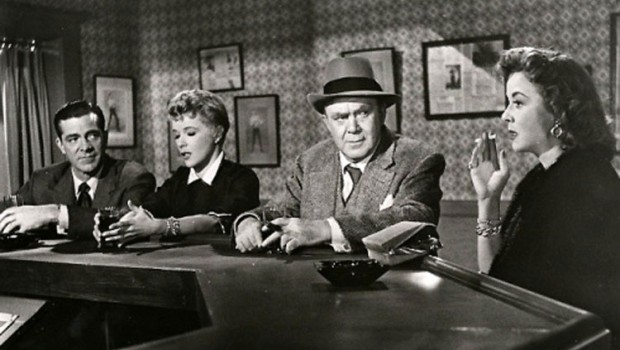 While the City Sleeps Review

Summary: The wonderfully lascivious characters keep the drama fizzing right to the end.

While the City Sleeps, originally released in 1956, is one of Fritz Lang’s later, more cynical works. It may not be in the same league as Metropolis, M or The Big Heat, but there are enough interesting elements to make it worthy of rediscovery.

One of the most fascinating aspects of the film is the way it blends genre conventions into an unusual narrative. It’s sometimes tagged as a film noir due to its pessimism, crime-themed plot threads and flourishes of Expressionist cinematography (courtesy of legendary DoP Ernest Laszlo), especially during an exciting third-act underground chase. However, the narrative also draws heavily from the ever-popular newsroom picture, even if While the City Sleeps is less comedic than most.

The majority of these characters prove to be astonishingly cyncial creations. While the Lipstick Killer may be the woman-throttling baddie, the three competing execs are prepared to do pretty much anything short of murder to win the top job, and Victor is shown to be a clueless playboy who needs a strong advisor to take the reins while he plays golf. Loving makes the least overt effort to secure the job, yet considers he has one up on his competitors as he’s having an affair with Walter’s wife, Dorothy (Rhonda Fleming) – for her part, Dorothy thinks she’ll be able to use Loving to get what she wants.

Even Mobley, the nearest the film has to a traditional square-jawed hero, turns out to be far from flawless: he’s permanenetly drunk, and happily consents to smooching (possibly more) the scheming Mildred (Ida Lupino), despite being engaged to good-hearted, conventional secretary Nancy (Sally Forrest). When Nancy understandably gets upset about his philandering, Mobley acts like Nancy is the one the one being irrational. Still, after he improbably gives chase to the Lipstick Killer, Nancy falls into his arms again pretty fast…

The serial killer and newsroom threads never quite gel (even if Lang hints at a corrolation between the two), and there’s the occasional over-reliance on coincidence that goes against the realistic tone (would Loving and Dorothy really carry out a secret affair in the apartment opposite Nancy?); otherwise, this is a typically complex, grown-up drama from Lang. The murders are tense and the office politics even more so, as Lang lays into the superficiality of mega-corporations and newsroom ethics. And if the plot strands are eventually tied up in a fairly conventional manner, the wonderfully lascivious characters keep the drama fizzing right to the end.