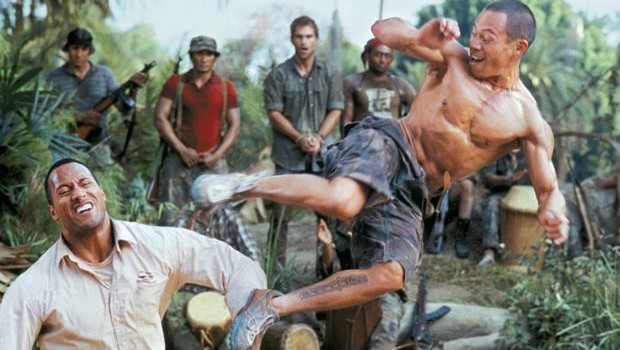 Welcome to the Jungle Review

Summary: With its charming blend of stunts and explosions, it remains a movie to warm to against all your better senses.

Director Peter Berg obviously fancies himself as some kind of misunderstood auteur, for Welcome To The Jungle reaches DVD and video in the unlikely form of a “Director’s Cut.” Actually, while by no means a classic, Welcome To The Jungle (known as The Rundown in the States, and produced under the unappealing moniker of Helldarado) makes for a surprisingly enjoyable action-comedy, which is more than anyone could have expected.

The plot hungrily steals plot points from a hodgepodge of other, better movies. This particularly takes the form of Midnight Run and late-Eighties Schwarzenegger actioners (witness the knowing early cameo of Governor Arnie himself), but there are also traces of Indiana Jones and Sergio Leone spaghetti westerns thrown in too. The Rock somehow makes all of this seem less clichéd than it actually is, exuding huge charisma in the role of cook-turned-bounty hunter Beck. Roped in for the standard ‘one last job’ by his thuggish employer, he’s sent deep into the Amazon jungle to bring back cocky upstart Travis (Seann William Scott). Naturally Travis isn’t too keen to be whisked off, and after a little brawling and some rather hefty plot contrivances, the pair agree to put off the trip back until they recover a priceless artefact for some local rebels. This brings the unwanted attentions of local despot Hatcher (Christopher Walken) who, with his ragbag of cut-throat henchmen, sets out to destroy the heroes and nab the treasure for himself.

In many ways the themes in Welcome to the Jungle are surprisingly liberal, a world away from the Right Wing excesses of the eighties. After all, here we have a hero who is reluctant to use firearms (alright, so this doesn’t quite hold out to the end but at least the idea’s there), and an American baddie ruthlessly exploiting poor Third World peasants that inspires a wholly justified guerrilla rebellion! Okay, so it does take a couple of Americans to really bring freedom to the community, but this is a mainstream Hollywood movie we’re talking about here after all. And let’s not over-analyse – it’s a pretty dumb Hollywood movie at that. The characterisation is paper thin, the plot riddled with holes and the dialogue never less than superficial. None of which is likely to come as any great surprise, and indeed appears to actually be a pre-requisite for this kind of film nowadays.

But there’s also a rare sense of genuine fun about this movie. The jungle locations are nice, the action scenes often spectacular (despite an occasional tendency towards over-stylisation) and The Rock and William Scott spar well with each other. Not that the pair are exactly stretching themselves here. William Scott in particular just re-hashes another variation on the usual Stifler routine, though this is thankfully much better than Bulletproof Monk in the action-comedy stakes. In fact it’s only Walken who disappoints, sleepwalking his way through yet another villain role, this time as one who mostly consists of dispensing annoying quips at inappropriate times as if he’s just walked in from a particularly bad episode of Friends.

As far as throwaway movies go, Welcome to The Jungle is top quality trash. You can’t really get away from the fact that its target audience is probably 12 year old boys – it does star a WWE wrestler after all. But with its charming blend of stunts and explosions, it remains a movie to warm to against all your better senses.