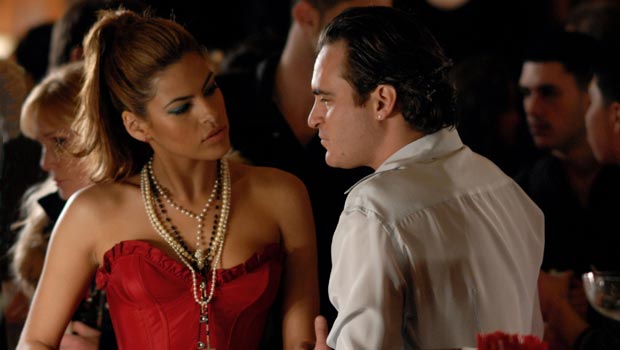 We Own The Night Review

A generic thriller that aims for deeper resonance, We Own The Night is an intriguing feature, undermined by a plot that stretches credulity, yet which still manages to conform to predictable gangster flick cliché.

Echoing Goodfellas and more recently, The Departed, writer and director James Gray, with his third New York crime drama after Little Odessa and The Yards, establishes a compelling premise – an old-fashioned narrative about two brothers operating either side of the law, pitting the free agency inherent in (immigrant) pursuit of the American Dream against the fatal determinism of Greek tragedy. That the film boasts two stunning action sequences, solid performances from Mark Wahlberg and Robert Duvall, blistering sultriness from Eva Mendes and a standout turn from Joaquin Phoenix, only highlights the myriad flaws in the script.

Taking its title from an NYPD motto, We Own The Night is set in 1988 Brooklyn. Bobby Green (Phoenix) enjoys fast times as the manager of a successful nightclub owned by a paternal Russian businessman. But drugs are flooding into New York and Bobby’s strait-laced cop brother, Captain Joseph Grusinsky (Wahlberg), is heading up a narcotics strike force. Having adopted his mother’s maiden name, Bobby’s family identity is secret to everyone in his social circle, save for his girlfriend Amada (Mendes).

When Joseph and their father, Deputy Chief Albert Grusinsky (Duvall), request Bobby inform for them on his clients’ criminal activities, he angrily rejects their entreaty. So Joseph leads a raid on Bobby’s club, arresting the Russian owner’s cocaine smuggling nephew Vadim (Alex Veadov). Bobby is dragged down to the station and into a bitter fight with his brother, but when Joseph is subsequently shot and hospitalised, he asks to wear a wire tap and infiltrate Vadim’s operation.

During the sting, Bobby is exposed but survives, while Vadim is arrested, though not without piecing together the family ties that ensnared him. Bobby and Amada enter the witness protection programme and Joseph leaves hospital, but when Vadim escapes custody, the fatal consequence compels both brothers towards their destiny.

Gray’s strengths as a director are obvious, with carefully executed long takes and overhead shots reinforcing the perception of his characters as ill-fated playthings of the gods. The undercover operation is tense, sharply paced and only matched for visceral excitement by a car chase sequence in the driving rain, the downpour subtly rendered with CGI post-filming.

Still, these are the only really fresh elements in a film that too often feels reminiscent of others. The likes of Martin Scorsese and Paul Schrader have explored conflicts of family, duty and criminality far more convincingly and Gray is unwilling to eradicate sentiment for clinical style in the manner of say, Michael Mann.

As screenwriter, Gray ultimately succumbs to melodrama. But not before a series of contrived plot developments strip the film of any credibility, from asking his audience to accept that Bobby could successfully withhold the knowledge of his family from his employers, to the point-blank “professional hit” that fails to kill Joseph, right through to Vadim’s almost cursory escape from arrest.

Granted, such outrageous fortune conforms to Gray’s scheme of the individual doomed to their fate, but these machinations are so clunkingly executed as to invite derision. Moreover, the film’s soundtrack is at least half a decade out of date and the Russians are stereotypical to a thug, the ruthless Vadim most of all.

As the insecure, high-achieving officer of the law still in awe of his father, Wahlberg is fine, further carving the niche he’s created for himself playing temperamental cops, though here he lacks some of the edge of his character in The Departed. Duvall, likewise, is well cast in the type of grizzled role that he can play without breaking sweat. Mendes is simply asked to emote angrily and look sexy, but Phoenix is afforded the opportunity to express himself and he excels, shifting convincingly from a cocksure black sheep with everything going for him to a troubled weapon of state retribution.