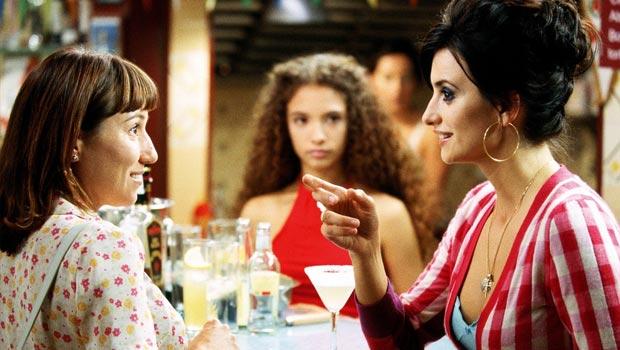 Raimunda (Cruz) is a hard-working young woman, with an unemployed husband and a teenage daughter Paula (Cobo), living in the Spanish equivalent of council flats in a working class neighbourhood of Madrid. Raimunda’s timid older sister Sole (Duenas) lives nearby, running a hair salon out of her apartment. The girls originally come from a village in La Mancha where their aunt Paula (Chus Lampreave) still lives. The village is famed for its winds, which are responsible for the fires that devastate the area every summer and the high rate of insanity among the inhabitants. Family legend has it that Sole and Raimunda’s parents died in each other’s arms during one of these fires.

When Agustina (Portillo), a neighbour from the village, calls to say that Aunt Paula has died, Raimunda is upset. But she can’t attend the funeral because she has just found her husband dead in the kitchen, a knife in his chest. Paula confesses that she killed him in self-defence when he tried to rape her. Raimunda must save her daughter; that has to be her priority. So Sole goes to the funeral alone. She is intrigued to hear the rumours that her mother’s ghost has been taking care of Aunt Paula. And terrified when, on her return to Madrid, she hears a knocking from the trunk of her car and her mother’s (Maura) voice asking to be let out.

Sole brings the ghost to her apartment, and introduces her to clients as a Russian beggar whom she has taken in out of charity. The mother washes hair and smiles. Sole daren’t tell Raimunda; in the meantime Raimunda has stashed Paco’s corpse in the deep freeze of the restaurant where she works and has told everyone that he left her. The women lie and lie and somehow the weird situations they find themselves in become normal. But ghosts have a reason for coming back, and mother is no exception.

Volver reunites many of Almodovar’s favourite actresses and some of his favourite themes and I liked it much more than Bad Education, sex Mex or no sex Mex, largely because it combines comedy with melodrama and is much more colourful and real. It’s extremely funny in places, particularly with the ‘Russian’ and Raimunda’s reactions to her. It’s also what would, in the golden age of Hollywood, have been called a ‘woman’s picture’. This is a world of women, buzzing like bees, scrubbing graves, all generations, shapes and sizes, from which men are almost entirely excluded. Raimunda may flirt with customers in her restaurant but her daughter – and disposing of Paco’s body – comes first.

Along with the melodrama comes vivid colour. Blood blooms on a white cloth; Cruz, all sexily mussed hair, tiny cardigans, pencil skirts, boobs and scarlet lipstick, stands out like an exotic orchid amongst the black clad widows and drab backdrop of Madrid’s streets. Which brings me to Ms Cruz. She should never work in Hollywood again. Intensely irritating in every English language film I’ve seen her in, she is so much better in Spanish that it’s like watching a different actress at work. Volver is a richly sensual experience, swoonsome and dreamily wonderful.