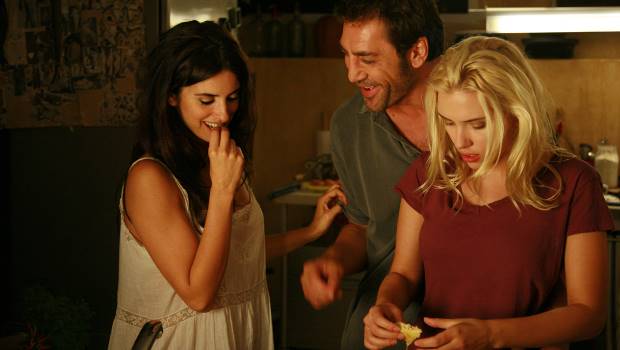 Summary: The final result is very much a success, and a good advert for the city.

Woody Allen has re-emerged from the ashes of his exploits in England with this delightfully light, but sparky romantic comedy set in Spain.

A sense of relief was felt by all at the Cannes film festival earlier this year, when Vicky Cristina Barcelona was screened for the first time infront of a sceptical audience. Those in attendance were clinging desperately to the hope that Allen could rediscover his old form with films such as Annie, Manhattan and more recently Bullets Over Broadway, but were feeling rather dejected and unenthusiastic after the recent dissapointments of Casandra’s Dream, Match Point and Scoop.

Fortunately, thanks to some excellent performances from Penelope Cruz, Scarlett Johansson, Rebecca Hall and most of all Javier Bardem, the film industry and public’s affair with Allen has been rekindled. Although, we’ll have to wait until February to see what the reaction will be like in the UK.

Set in modern day Barcelona, the film feels like a throw back to the 1950s screwball comedies with Bardem playing the smooth, but somewhat offbeat, lothario, Juan Antonio who gets entangled in a three way love affair with the neurotic Maria Elena (Cruz), the guarded English girl Vicky (Hall) and the free spirited American, Cristina (Johansson).

The story begins with Vicky and Cristina travelling to Barcelona for one final break before Vicky is due to be married to a successful, but boring businesman. Vicky is convinced that she needs order and stability in her life, while Cristina is desperately trying to get her to loosen up. Things come to a head when Juan Antonio approaches their table at a restaurant and rather brazenly asks them to join him at his house for the weekend for some “fun”. Not surprisingly, Cristina is game, but Vicky isn´t.

Cristina and Juan Antonio are then caught up in a whirlwind romance, taking in the sights of the city and enjoying their personal artistic pursuits; she as a photographer and he as a painter. This idealic picture is rather abruptly altered when Cruz enters the equation as a suicidal ex-girlfriend of Juan Antonio. He feels the need to protect her, and before long the three of them are emerssed in a love affair, each relying on one another for their own happiness. But Cristina soon gets bored, and decides to leave, only to be replaced by Vicky who, despite her better judgement, finds herself falling for Juan Antonio´s charms.

The enjoyable interplay between the main protagonists is helped by a strong dialogue, written by Allen, some quirky and often amusing performances from the actors, and a wonderful backdrop in Barcelona. Allen himself told FutureMovies that “Barcelona is one of the most romantic cities in the world. My wife was over the moon when I told her we’d be spending some time there.”

The local Catalan government was also pleased to see him there, providing cash for the film to be shot in the city. Although this didn’t go down too well with some locals, as main streets were blocked off, and security was tightened. The local film industry was also annoyed that the government was happy to pump money into a US project, but not so forthcoming with Spanish and Catalan films.

That said, the final result is very much a success, and a good advert for the city. Let’s hope Allen can maintain this form with his next project Whatever Works, set to star Larry David (writer of Seinfeld and Curb Your Enthusiasm).