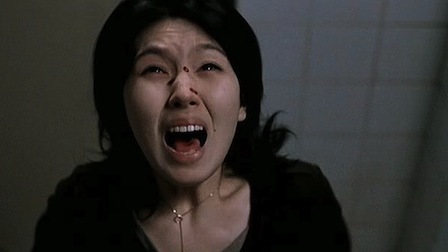 It’s fair to say that the whole J-horror phenomenon grew tired a good few years ago, but here we have the belated release of a South Korean Ringu knock-off from 2002. Sadly, Unborn but Forgotten is closer to the woeful Hollywood remake of The Ring 2 than Hideo Nakata’s unsurpassed original.

The story doesn’t make a great deal of sense even by the typical distorted logic of the genre. A pregnant TV reporter (Lee) and a dedicated cop (Jeong) join forces to investigate a string of mysterious deaths – the only clues linking the women being that they were all pregnant and that each victim had clicked on a strange website 15 days before they died. The reporter soon realises that in order to avert her own death she needs to find a way to placate the murderous spirit. Or something.

Director Chang-Jae Lim has obviously spent a good few days brushing up on his horror movies, and stuffs his film with creepy staples like whistling kettles, creaking pipes, eerie dolls and perpetual rain and thunder. But as his confused story stumbles along (the whole possessed internet website proves to be a particularly desperate plot device) it becomes clear that Lim has nothing new to add to the genre – aside from a possible Pro-Life subtext.

There aren’t even any memorable set-piece shocks to mark this movie out. Instead Lim attempts to mask this lack of invention by bathing the entire movie in a dimly lit haze, the result being that the visuals end up as dreary as the plot. This is a movie that’s almost pathologically humourless – would it have killed Lim to have slipped in a couple of wisecracks now and again?

As Unborn but Forgotten plods along to its feeble conclusion, you’re left hoping that, rather like the rancorous spirits themselves, this whole sub-genre is finally laid to rest. Meanwhile, anybody who does require a half-decent South Korean spin on Ringu should check out 1999’s superior The Ring Virus.