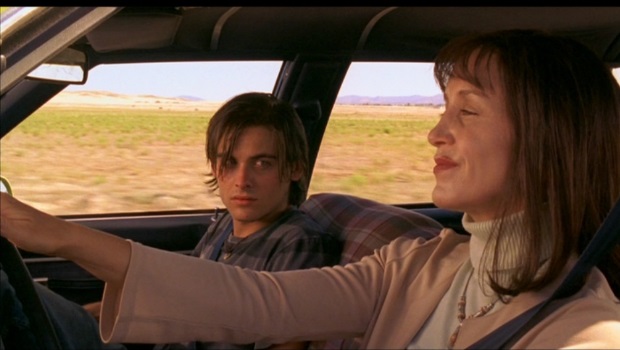 Summary: It’s sweet and moving and human, all held together by Huffman’s awesome central performance.

Let’s talk about sex. (Well not really, but if you want to, email…) As previously discussed, this year there’s been a clutch of performances, critically acclaimed and Oscar-nominated, which include Heath Ledger’s closeted, unhappy Ennis Del Mar, the equally glum Jake Gyllenhaal, Philip Seymour Hoffman as Capote and of course Felicity Huffman. Of her performance, more later. First, a little scene setting.

Bree (Huffman) is a pre-operative male-to-female transsexual. Living quietly in a poor area of Los Angeles, passing as a woman, working two jobs, Bree is a week away from her sexual reassignment operation when she gets a phone call from a boy called Toby (Zegers), a jailed hustler and runaway who is looking for his father. Bree is horrified to realise that Toby is, in fact, her son, the product of a fumbled sexual encounter; she is more horrified when her therapist tells her that she has to deal with this new development before she can approve her surgery.

Bree grudgingly flies to New York, pays Toby’s bail (a bit peeved to find that it’s only a few dollars) and gets him out of jail. Toby assumes from her conservative dress that she is some sort of Christian outreach worker and she decides not to correct him. But when she discovers that Toby is planning to move to LA, become a porn star, and search for his real father, Bree panics. She doesn’t want Toby anywhere near her quiet little life. She offers to drive him to LA, planning to return him to the stepfather he ran away from. Toby accepts, and this oddest of odd couples set off across America on an unexpected journey…

It’s impossible to write about Transamerica without discussing Felicity Huffman’s incredible performance as Bree. Gone is Lynette of Desperate Housewives fame – still womanly even in a man’s shirt, covered in baby sick. Bree is awkward in her body. Her make up is slightly too dark. Lipstick slightly outside her lip line. Hands too big, always tucked in. Heartbreakingly vulnerable walking in heels (aren’t we all?). Slightly too big, concealing clothes in lavender and puce, and a hunched posture, hidden behind sunglasses, trying to disappear. Bree’s courage cannot be doubted – it’s hard for her to leave the house at all, and the only friend she has is her therapist. She has made herself a new life, modelled it out of nothing, and she’s safe, but she’s not free. Huffman goes beyond even the transformation of Hilary Swank in Boys Don’t Cry – she is a woman playing a man playing a woman.

The script has fun with this. Bree has to be constantly on her guard, she is always careful to be ladylike. She doesn’t curse, she always carefully folds her legs, sits neatly. But when things go badly wrong, the act slips – ‘oh shit,’ she says. ‘I mean darn. No, I mean shit.’ She slumps onto a sofa, legs splayed under her skirt.

Kevin Zeger, a Canadian child star, more than holds his own against Huffman. Extraordinarily pretty, Toby’s only currency in an adult world has been sex, and he can’t understand why Bree isn’t interested in him physically. Consequently, he spends the early part of the journey shutting Bree out – he’s an entirely, convincingly maddening teenager and I would have thrown him out of the car.

But if this all sounds a bit heavy, it’s not. Transamerica is a delight. It carefully balances whimsy and seriousness, finding humour in some fairly dreadful situations. It’s sweet and moving and human, all held together by Huffman’s awesome central performance. Kicking Bird’s in it! And, if she wins, we’ll get to see some more Oscar after-party dance floor moves in Heat.