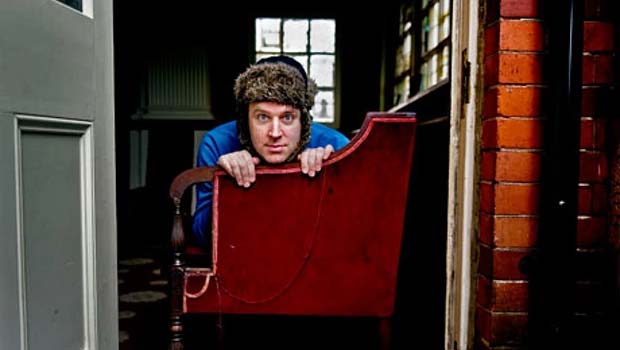 Tim Vine: So I Said To This Bloke … Review

Summary: Limitations compel's Tim Vine to excel within the parameters he imposes on himself.

Once a Guinness World Record holder for the number of jokes told in an hour, an impressive 499, Tim Vine’s comedy is an acquired taste. But if you enjoy endless puns delivered with relentless enthusiasm, then So I Said To This Bloke … is a fine showcase of his talents.

Recorded at the Bloomsbury Theatre in London during July 2008, Vine is cheesily shameless in his presentation of the most tenuous one-liners, ridiculous songs and fooling about with props. All are unveiled with such a devotion to silliness that you forgive even the hoariest routines, the comic acknowledging occasional groans with a “don’t worry, we’ll put the laughs on later”.

An hour of even his slickest jokes would be wearing though and Vine wisely varies the pace and intersperses his one-liners with a greater number of songs than he’s ever previously performed, each as utterly pointless as the last.

A standout is the gleefully daft Flag Hippo, which he imagines keeping us awake later pondering just what the hell it was about. Elsewhere, he spends almost ten minutes trying to catch a pen behind his ear, skilfully keeping the crowd invested in his monotonous enterprise by testing their patience to ludicrous, and thus extremely funny, excess.

Although Vine’s set is undeniably formulaic and family-friendly, these limitations compel him to excel within the parameters he imposes on himself, challenging the audience to second-guess his punchlines from the setups while throwing in enough absurd detours to keep it interesting.

Extras on the disc are many but disappointing. Most are simply Vine messing about with his camcorder and friends, a spoof report on him trying various sports scarcely justifying the time and effort expended upon it.

Still, there’s an amusing interview with a psychologist in which she identifies his addiction to puns as arising from emotional issues and a fear of intimacy, to which he responds appropriately enough with a pun. And a sweet moment when his dad is hauled on stage to deliver the first joke he ever told the young Tim.