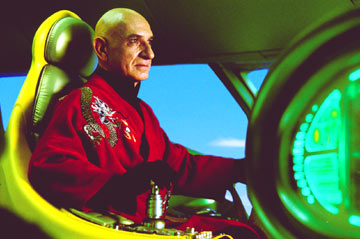 Ah yes, those familiar noises of remake territory. Cast and crew expound on how they felt compelled to respect the original source material while simultaneously eroding every last trace of it. The simple, charming effects of old are replaced by million dollar computer graphics. And another originality-free escapade limps sorrowfully onto cinema screens, dearly hoping an army of hype will substitute for actual merit.

Let’s get one thing clear; any level-headed fan of Gerry Anderson’s cult phenomenon is going to really detest Jonathan Frakes’ bone-headed re-imagining. Not least because most of the entire, quirky charm of Anderson’s comic-book tales lay in the fact they were made with string puppets. Puppets, not people Frakes! Should you manage to get past this rather unforgivable oversight the stilted, clichéd hour-and-a-half that awaits you is unlikely to make that headache go away.

The film opens with a pleasingly old-fashioned voice-over setting the scene. It’s 2010, and the top secret International Rescue group, under the leadership of the monstrously square-jawed Jeff Tracy (Paxton), are busy saving the world from the usual glut of worldwide disasters – you know, earthquakes, oil rig fires, patently dumb movie ideas and so forth. Poor sulky teenager Alan Tracy (Corbet) dreams of the day Pa will allow him into the family business. He gets his chance sooner than expected when demented criminal mastermind The Hood (Ben Kingsley) traps the rest of The Tracy clan on a burning space station and seizes beloved Tracy island. It’s left to Alan, his stupidly-named friends Fermat and Tin-Tin and the refined Lady Penelope and Parker to save the Tracys and foil a plot to frame International Rescue for – please no! – looting the Bank of England.

What we have here is essentially a film that is probably efficient enough for young children, the familiar story slogged through with enough explosions and bright colours to hold their attention. Anyone over the age of about ten is, however, likely to find Thunderbirds sadly lacking about half of the imagination of the similar-themed Spy Kids movies. Thunderbirds is unable to achieve the crossover appeal for parents that Spy Kids had either, a real missed opportunity considering the fondness many nostalgia-drenched adults hold for the original show. The script (based on a story by Brit director Peter Hewitt) barely attempts anything other than ploughing through one cornball cliché after another; the sight of Paxton staring dew-eyed at a family photograph is probably the most amusing moment in the entire movie.

The Tracy family are presented as uniformly boring characters, and poor Bill Paxton has little to do but float about in a space station doing nothing for most of the movie. Okay, so the Tracys were never that interesting in the TV show, but at least they had the valid excuse of actually being made out of wood; whether the actors of the 2004 version could put up the same defence is certainly an interesting question. Ben Kingsley at least injects a little energy into his villain, clearly happy to coast after stretching his acting muscles in The House of Sand and Fog. Anyone who considers ‘Open All Hours’ to be the funniest show ever invented may also find Anthony Edwards’ stuttering professor Brains to be a work of unparalleled comic genius. The highlight for most adults is more likely to be the unexpected delight of Sophia Myles and Ron Cook as Lady Penelope and Parker. The duo play what were perhaps the original show’s most memorable characters with just the right level of tongue-in-cheek humour (never overdoing it): you’re just left wishing they’d been graced with a little more screen time.

Director Frakes can cope with big scale science fiction, as his turn behind the lens for Star Trek: First Contact and Star Trek: Insurrection showed. Indeed, it’s certainly true that the action scenes in Thunderbirds are proficient enough, particularly when it moves to central London towards the end. But the Star Trek movies were lucky enough to come with characters developed over several seasons. Here Frakes is unable to paper over a fundamental lack of interesting characters or meaningful dialogue; being a family film isn’t enough to excuse such a crucial lack of heart.

In an attempt to be kind, you could point to the fact that Thunderbirds is at least better than The Avengers’ doomed attempt to recreate the magic of another popular British fad. But where’s the point in being kind? Whether you compare it against the original series or not, Thunderbirds is charmless and lazy filmmaking. Though, it’s when we start hearing about a re-invention of the magnificent ‘Terrahawks’ that the joke will have really gone too far…