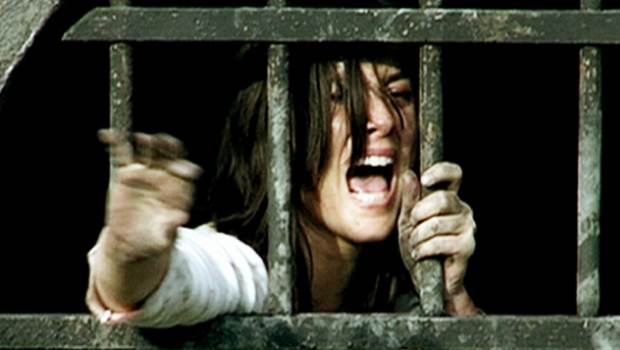 Summary: It’s something of a treat to stumble across a decent horror that’s neither a variation on the well-worn J-Horror theme or a throwback to the exploitation flicks of the 70s.

French ex-pats Clementine and Lucas have settled into a new life in Romania. One night the couple are awoken by strange noises from outside their isolated farmhouse. It marks the beginning of a terrifying ordeal as they find themselves the victims of mysterious and merciless assailants…

First of all, let’s make one thing clear – the success of Them doesn’t lie in its originality. One part Friday the 13th to one part Straw Dogs (with a dash of Panic Room thrown in for good measure), there’s little in the film’s simple set-up that you haven’t seen before. The dialogue, too, is mostly mundane, and largely consists of desperate cries, or Lucas rasping commands to Clementine as he attempts to take control of the situation.

Yet the simplicity of this Gallic horror is actually its key strength. The stripped-back nature of the plot means that Moreau and Palud are free to zone-in our most primal fears: namely darkness, confined spaces and isolation. From the vice-like opening sequence onwards, it’s clear that the pair of filmmakers are well versed in the rules of the genre. It’s the sign of an accomplished horror when your heart’s pounding before the opening credits have even started to roll.

The film is smart enough to keep its attackers apparently motiveless and, for the most part, unseen. Like the best horror movies, Them is aware that fleeting glimpses and eerie sounds are far more terrifying than any snarling CGI beast. The unseen attackers also have the effect of forcing the viewer into becoming trapped alongside Clementine and Lucas, and Moreau and Cohen escalate the claustrophobia through a combination of intense close-ups and ultra-tight editing.

When the villains are eventually unmasked in the final third, there’s little denying that it does rob the film of some of its mystery. Yet the disturbing nature of the revelation, coupled with the late inclusion of a creepy network of tunnels, mean that it’s unlikely anyone will be set at ease. And at a lean 77-minutes, Moreau and Cohen have made sure that their movie doesn’t have an inch of flab.

It’s something of a treat to stumble across a decent horror that’s neither a variation on the well-worn J-Horror theme or a throwback to the exploitation flicks of the 70s. Suddenly, Moreau and Palud’s upcoming remake of The Eye seems like a very welcome prospect indeed.