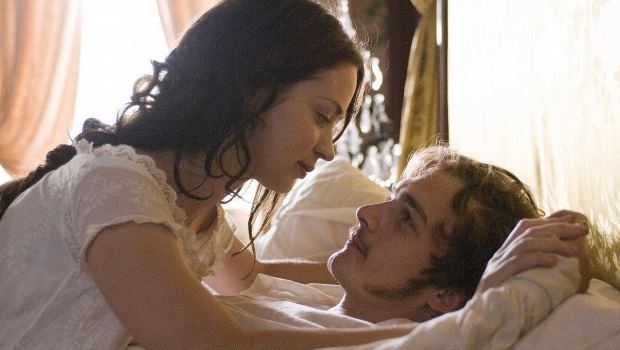 Summary: The main strength of The Young Victoria is its love story between our heroine and Prince Albert.

It’s been six months since The Duchess was bothering our multiplexes, so it must be about time for another lavishly produced period drama about a young and beautiful royal who has to keep all her emotions wound up tighter than the threads of her heaving corset, right? Thankfully not. While The Young Victoria certainly ticks all the traditional boxes (lush unspoiled English scenery, immaculately picturesque mansions and yes, corsets) it also presents a fresh and quite fun perspective on a Monarch we’ve only generally seen as old and in mourning, and provides a showcase for the talents of Emily Blunt who, on this evidence, deserves to steal Keira Knightley’s ‘English Rose’ crown before the year is out.

Delving into the life of coronation era Queen Victoria (circa 1837) writer Julian Fellowes (Gosford Park) has found a rich vein of history largely untouched by Hollywood, and mines it to tell a story that is both politically engaging and gloriously romantic. To begin with the politics and power take precedence, as we are introduced to the aged King William (a top-form Jim Broadbent) and the tussle going on to secure control of Victoria, the young heir to the throne. Fellowes cleverly uses the Belgian Prince Albert (Rupert Friend)’s education in the who’s who of English aristocracy to bring the contemporary cinema audience quickly up to speed, with Albert’s brother reeling off names while we see the corresponding person arriving at the King’s birthday party.

Chief in the political mix is Paul Bettany’s Melbourne, who becomes an uncomfortable mix of advisor, father figure and object of affection in the young Victoria’s life. His influence on her leads to a key political crisis early in her reign, and this is the one area where the film overreaches; the speed with which events fly by suggests cutting due to running time constraints, resulting in the film failing to successfully explore this interesting aspect of Victoria’s story.

But the main strength of The Young Victoria is its love story between our heroine and Prince Albert, and it is this element that gives the film its beating heart. A well-crafted chess-playing scene establishes Victoria and Albert’s connection, with her recognising him as a kindred spirit and possible ally in the midst of all the self-seeking politicians and hangers-on. Blunt and Friend fully convince us of their mutual attraction, most of which has to be conveyed through glances, and as their relationship blossoms through exchanges of letters, director Jean-Marc Vallée expertly builds the anticipation for their eventual union. Only the hardest heart could fail to be swept up in the film’s showpiece scene, a grand ballroom dance where Vallée pushes the music up in the sound mix while Hagen Bogdanski’s floating camera catches every loving look from Victoria and Albert’s eyes.

Emily Blunt proves herself well able to carry the film, while the established stars in the supporting cast recognise that this is Blunt’s show, allowing their performances to serve hers. She is obviously beautiful, but also has a strong on-camera presence that commands attention, as well as a warmth and charm that is all her own. As she appears in successively bigger movies (including a turn opposite Benicio Del Toro in The Wolf Man later this year), we will undoubtedly look back at The Young Victoria as the moment when Emily Blunt became a star.