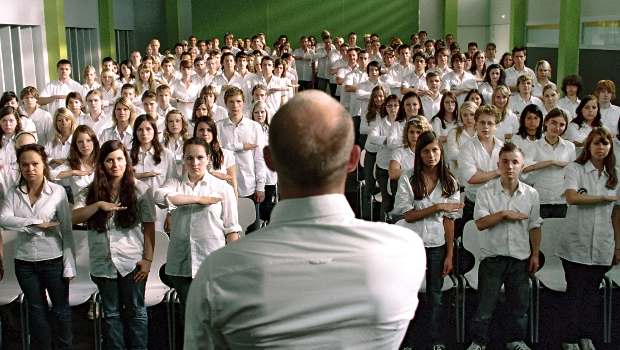 Summary: The success of the film is largely thanks to Jürgen Vogel’s excellent performance as Rainer.

This German blockbuster, which has made over $20 million on home turf, begins with the dubious legend ‘based on a true story’. A bit of investigation into this story’s origin reveals that ‘based on’ is the operative part of that phrase, being as the film is actually inspired by a novel, itself a fictionalization of a TV movie about a real event. But despite its loose attitude towards ‘true stories’, Dennis Gansel’s thought-provoking film is a very good piece of entertainment, best approached as an exaggerated piece of cautionary speculation.

The Wave details the events of one week in a German high school in which, as a way of educating his class about autocracy, teacher Rainer (Jürgen Vogel) decides to run the class on the principles of a fascist regime. Some students treat it as a joke, some are disgusted and others begin to embrace this new order; unfortunately Rainer doesn’t foresee the devastating effect that this experiment will have for all concerned.

It’s a hugely compelling scenario, and Gansel keeps the momentum up, feeding our grim fascination in seeing the effect of The Wave (the name the students give to their new social group) as it seeps out of the classroom and into students’ lives. The speed with which events escalate is believable given the high-school context, and while some of the students’ actions and responses stretch credibility, the excellent ensemble cast never give less than their full conviction, which helps Gansel sell some of the more far-fetched developments.

But the success of the film is largely thanks to Jürgen Vogel’s excellent performance as Rainer; we are never really sure of his motives, and the complex treatment given to his character ensures we can’t opt for any easy answers. While it is clear from the outset that The Wave cannot end happily, the way that Gansel builds up to his gut-punching conclusion ensures audiences will share Rainer’s devastation as they leave the cinema.