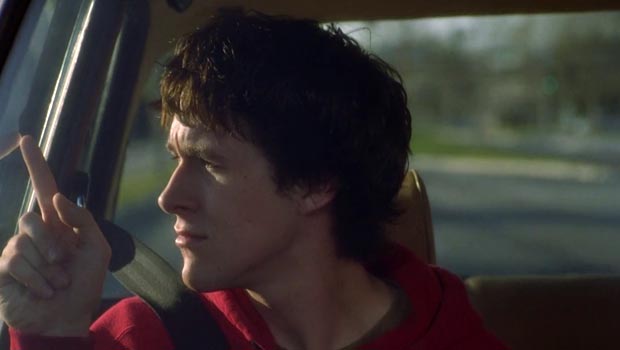 The United States of Leland Review

Summary: The film is a little slow, but is also surprising.

When 15-year old Leland P. Fitzgerald (Gosling) is committed to a juvenile detention centre for the murder of his ex-girlfriend’s retarded brother, the one thing everyone wants to know is why? Why did Leland do it? Leland doesn’t seem to know himself – sometimes things just happen – but with the help of Pearl Madison (Cheadle), a sympathetic teacher at the centre, he begins to keep a journal, which may provide answers.

Through Leland’s diary entries and conversations with Pearl (often shown as flashbacks) we see how sad and lonely Leland’s young life has been. His father, a famous novelist (Spacey), is divorced from his mother and now lives in Europe; he has no time for characters that exist outside his books. The only person that Leland really cares about is Becky Pollard (Malone), but she has problems of her own. Her sister Julie’s (Williams) boyfriend Allen (Klein) lives with the Pollards following the death of his mother. Julie is the centre of Allen’s world, and he has their entire future mapped out. The surfaces of this suburban, affluent American world are glossy, but underneath there is a well of sadness; a tragedy waiting to happen.

Pearl’s motives are not entirely altruistic. A writer himself, he sees in Leland a potential novel; though he is set up as an alternative father-figure – the good father as opposed to the distant, uncaring Albert – he is compromised by his own morally questionable behaviour. Leland, who is very perceptive for one so young, discovers that Pearl has been cheating on his long-distance girlfriend. When Pearl defends himself with the age-old line ‘I’m only human’, Leland responds ‘its funny how people only say that when they’ve done something wrong. They never say it when they’ve saved a child from a burning building.’

The United States of Leland is, like its protagonist, disturbing and perceptive. It confronts our prejudices head on and refuses to judge the boys at the Detention Centre, showing that all the characters in the film are equally flawed. Though Leland has committed a terrible crime, he’s not a monster. In fact, he’s a lovely, smart, unhappy and depressed youth. The film bears some resemblance to Donnie Darko, partly due to the casting of Jena Malone, but its less metaphysical and clever clever for its own sake. Like Kids, it shows how little parents, however well-meaning, really know about their childrens’ lives.

Ryan Gosling is very good as Leland, with his sweet half smile and his sad puppy-dog eyes. His tale is melancholy, but the film itself feels oddly positive and gentle, which is reflected in the decision to use bright lighting and soft, vibrant colours – . The rest of the cast are very good, particularly Jena Malone, Don Cheadle and Chris Klein. Klein has never impressed me much, he always seems to play the same lunk-head-but-sensitive jock types, and I was expecting the same here; he first appears in a letterman’s jacket. Instead he turns in a nuanced and delicate performance; he’s in love, and love can be dangerous. Cheadle on the other hand has been good in everything (apart from Ocean’s 11) I’ve seen, and he’s excellent here as a shallow, self-deceiving man who is forced to take a good look at himself.

The film is a little slow, but is also surprising, and has an unexpectedly sad twist in the last reel, while writer-director Hoge, who actually worked in juvenile detention centres, shows plenty of promise in this his second feature.