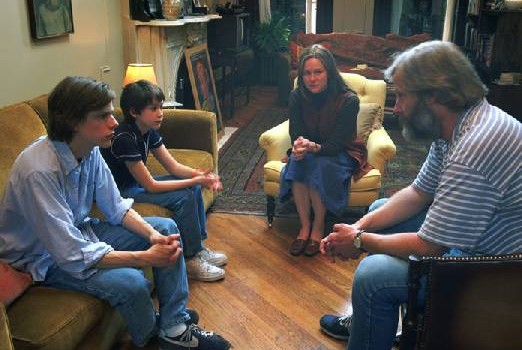 The Squid and the Whale Review

“I did everything I could to save this marriage,” protests self-absorbed writer Bernard Berkman (Daniels). “I made burgers that time you had pneumonia!”

A low-key comedy about a couple going through divorce may not sound like the stuff of cinematic magic, but with its spot-on character observation and sardonic wit The Squid and the Whale is an unexpected delight.

The setting is leafy Brooklyn, 1986. Portentous, impressively-bearded writer Bernard (Daniels) and his weary wife Joan (Linney) gather their two sons in the living room and make the unexpected announcement – they’re going to separate. From then on it’s an emotional tug-of-war between the parents (albeit one hidden behind a façade of reason) as they attempt to win over their children in clumsy ways. Amy addresses the children with inappropriate candour about her sex life both past and present, while Bernard feeds the children revelations about their mother to secure their sympathies. Sixteen-year-old Walt (Eisenberg) instinctively sides with his father as he trots out Bernard’s fatuous philosophies on life and literature to impress girls (summing up Kafka’s Metamorphosis – which he hasn’t read – as “Kafkaesque”). Younger son Frank (Kline) reacts to the split with quiet trauma, locking himself away to guzzle alcohol and going on to er, smear semen around his school.

This semi-autobiographical tale from Noah Baumbaum has plenty of tell-tale signs of his writing collaboration with Wes Anderson on The Life Aquatic. For The Squid and the Whale exists on exactly the same deadpan humour as Anderson’s movies, its characters blissfully unaware of just how ridiculous they are. This results in some often very funny dialogue and situations – Walt’s defence of stealing a Pink Floyd song for a concert because “I felt I could have written it” is a particular highlight. At the same time the constant irony behind what the characters are saying (particularly Bernard and Walt) leaves your sympathies towards them muted – don’t expect to find any of the heightened emotion of that break-up classic Kramer Vs Kramer here (thank God). But thanks to Baumbach’s tightly-woven script (clocking in at an economical 80 minutes – more movies under 90 minutes please!), these characters also feel real – bitter, arrogant, confused but nevertheless compelling.

The success of the film is also down to the wonderful performances from its key players. Roger Dodger’s Eisenberg excels as the rather weasley incarnation of Baumbach’s younger self, a mass of nervous nods, middle-distance stares and bluster, while Owen Kline also impresses as the child whose transgressions are both amusing and disturbing. Joan probably remains the most opaque character in the film – The Squid and the Whale is in part about the children’s re-discovering of their mother after all – but Linney puts in a heartfelt performance every bit as good as the one we witnessed in You Can Count on Me.

Ultimately though this is Jeff Daniel’s movie, and in his hands Bernard is a wonderful, fully-realised character. Egotistical, penny-pinching, delusional and deeply in denial, he also (like the best comic creations) remains endearing even as he’s waffling on about “minor Dickens” or boasting about his prowess with women. Never once does it seem even a vague possibility that this is the same man we watched having his tongue frozen to a ski-lift in Dumb and Dumber.

Stylistically close to Anderson’s movies – protracted takes, non-diegetic music abruptly cutting out with new scenes, limited character arcs – The Squid and the Whale remains a highly enjoyable examination of the inability of educated people to understand the world around them. Bernard himself might sum up the movie as “very dense”.

Baumbach is happy to talk freely about his film, and after listening to the commentary, making of feature and particularly the interview by Philip Lopate there can’t be much left to know about the movie. Alternatively, if you’re so inclined, you can just ignore the extras and come up with your own conclusions as to the meanings behind the movie.