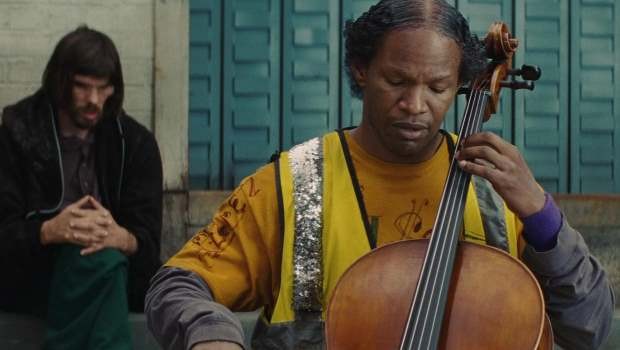 Summary: A story based on real events, and in the process reveals a side of Los Angeles seldom seen on the big screen.

Joe Wright takes some large leaps out of the comfort zone with his third film. Following two very successful and very British period pieces – Pride and Prejudice and Atonement – he jumps across the water and into the present day to tell a story based on real events, and in the process reveals a side of Los Angeles seldom seen on the big screen.

The Soloist has taken a while to arrive in British cinemas, after failing to make much of an impact at the American box office in April this year. It’s not hard to see why the film struggled, as while it appears from the marketing to be a predictable drama about friendship overcoming great odds, with all the usual emotional button-pressing you would expect, Wright’s film is anything but that. In telling how LA Times columnist Steve Lopez first encountered homeless musician Nathaniel Ayers, and investigating the unique relationship that developed between the two men, Wright presents a complicated, subtle and realistically open-ended story. Under Wright’s direction, these characters take the story on several unexpected detours, and a lot of issues surface that Wright isn’t satisfied in giving simple ‘movie solutions’ to.

Robert Downey Jr is always very watchable, and here he is restrained and believable as Lopez, convincingly showing the character’s delight at discovering Ayers and his simultaneous reticence to take responsibility for him. Jamie Foxx is close to unrecognisable as the mentally unstable Ayers, inhabiting the character in a performance that goes much deeper than outward tics and traits. Good as they are though, it’s the fact that Wright never showcases their performances, and instead brings his themes – homelessness, selflessness, friendship, faith (to name a few) – to the fore, that makes The Soloist great.