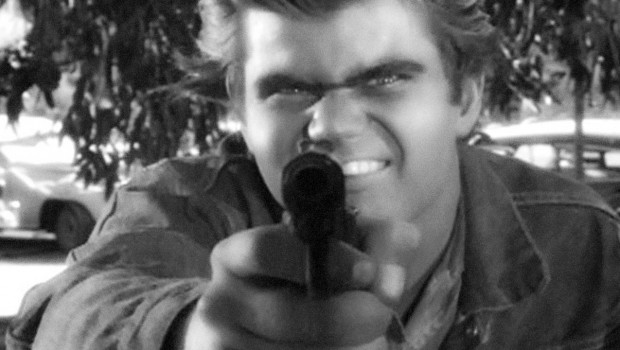 Summary: A raw and uncompromising little picture; little wonder that Joe Dante ranks it as one of the best B-movies ever made.

“A sadist… To have complete mastery over another, to make him a helpless object, to humiliate him, to enslave, to inflict moral insanity upon the innocent. That is his objective, and his twisted pleasure!” spits a voiceover before the opening credits have even rolled. Yes, we’re in classic exploitation territory. But though it’s perhaps not quite as celebrated as other low-budget quickies that have been reassessed as classics in subsequent years, 1963’s The Sadist is an interesting and influential little movie that should appeal to fans of the lovers-on-the-run genre.

The simple story barely escapes from a single location. On their way to a baseball game, three teachers – hunky square-jawed hero Ed (Alden), prissy maths tutor Doris (Hovey) and the older Carl (Oliver) – suffer car trouble and arrive at an eerily deserted garage looking for a part. After wandering around uneasily in search of the owners, they come to face to face with a young couple of killers – chuckling, Yogi Bear-voiced Charlie Tibbs (Hall Jr) and his silent, smirking 18-year-old girlfriend Judy (Manning). The psychotic duo hold the teachers hostage until Ed fixes them up a getaway car, killing the intervening time by playing sadistic games, both physical and psychological.

And that’s it really. Though the violence is perhaps tame compared to pictures that emerged just a few years later, director James Landis creates an almost unbearable sense of tension. Despite the sensationalist pre-credits voiceover, the film holds back before introducing its killers, taking time to build up an unsettling atmosphere and encouraging us to warm to the teaching trio. It serves to make Tibbs’s subsequent ever-escalating mind games all the more dreadful.

The Sadist contains at least one genuinely disturbing sequence as Tibbs stages an impromptu execution, made more shocking by the killer’s calm demeanour and casual coke-sipping, but there are plenty of other, lesser shocks and degradations in store for the heroes. The narrative doesn’t quite progress as you might expect either (Ed proves to be a strangely cowardly figure at times), and Landis really does create the sense that this kid-faced killer – quietly egged on by his girlfriend – could off his hostages at any moment (“Judy and I don’t like teachers!”). Like the Joker in The Dark Knight, Tibbs is a force of chaos that its incredulous middle class heroes are unable to comprehend – only there’s no Batman-style figure to swoop to their aid.

There’s a throwaway line about Judy’s dead father and drunken mother, but as far as Tibbs goes, we’re given very little background. From the film’s title, we assume he just loves the thrill of torturing people, making him much of more of an enigmatic, scary prospect – a nihilistic figure who hates everyone and everything except his beloved Judy.

Rather than a rasping bogeyman, Tibbs has a baby-face and an often childish gait. Arch Hall Jr may have secured the role through nepotism – he was the son of Fairway Films’ exploitation king Arch Hall Sr – but he makes for a wonderfully memorable killer, alternating between youthful charm and pure rage. Hall Jr almost turns Tibbs into a twisted variant on 50s outcasts like Johnny Strabler in The Wild One (if asked what he was rebelling against Tibbs might well echo Johnny’s famous snarl of “Whaddya got?”).

It’s an intense, exceptionally well made low-budget picture right up to its memorable conclusion, benefiting from a frantic jazzy score and moody cinematography by Vilmos Zsigmond (who would later go on to win an Oscar for his work on Close Encounters of the Third Kind).

If the story seems to share similarities with later lovers-on-the-run pictures Badlands and Natural Born Killers, that’s because all three movies were loosely based on real life killers Charlie Starkweather and Caril Fugate; though film’s title is perhaps inspired by Der Sadist, psyciatrist Karl Berg’s account of the 1920s murderer Peter Kürten. It may not be quite as poetic as Badlands or as flashy as NBK, but The Sadist is a raw and uncompromising little picture; little wonder that Joe Dante ranks it as one of the best B-movies ever made.