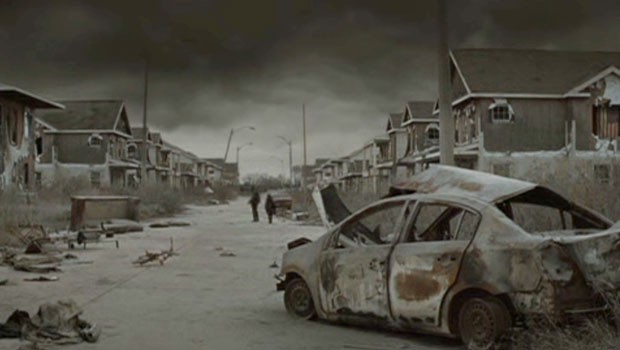 Summary: The abiding impression is of a genuine epic glimpsed only fitfully through the choking ash.

Like a zombie movie with pretentions to spiritual allegory, The Road pits a father and son’s love against the bleakest backdrops of apocalyptic desolation.

Adapted from Cormac McCarthy’s Pulitzer prize-winning novel, director John Hillcoat, helmer of 2005’s grimly compelling western The Proposition, is dutifully faithful to his source material (the book’s two most horrifying images notwithstanding) and affords his film a sweeping, austere grandeur.

A decade after an unexplained event brings about the end of the world as we know it, the unnamed Man and Boy, a weathered Viggo Mortenson and 11-year-old Kodi Smit-McPhee, drag a cart of their meagre belongings through the devastated ruins of the American South, scrounging for food and shelter on their way towards the coast.

With no animals or plants and the sunlight blotted out by grey ash, the only remaining food is rare canned goods and human beings, forcing the starving pair to stagger across the charred landscape, dodging cannibals and thieves.

By night, the Man tells stories of courageous heroes to the Boy and reiterates the moral imperative that they’re the good guys, carrying “the fire” inside of them. Then he shoots a man who threatens them, splattering his traumatised child in blood and brain.

His increasingly compromised morality is complicated by their isolationism and his survival instincts, as the Man clings to his faith in their future against all odds. His wife (Charlize Theron) is recalled in flashback as having given up, disappearing Captain Oates-like into the night.

As they journey on through ghost towns and blasted landscape, an elderly traveller looms out of the gloom, a gnarled Robert Duvall. It takes all of the Boy’s innate goodness and will to persuade his exhausted, resistant father to show compassion. Later, he fails to convince him that survival needn’t preclude forgiveness, and so none is extended to The Wire’s Michael K. Williams in a brief but memorable cameo.

Beautifully shot on denuded locations, several of which were left ravaged and deserted by Hurricane Katrina, the sober visuals of the film are chilling in their sparseness, the central, familial bond the sole source of warmth, save for an evocative, if occasionally mawkish score from Nick Cave and Warren Ellis. The two principals are excellent, Mortensen endowing lines like “the child is my warrant, and if he is not the word of God, then God never spoke” with suitable gravitas.

Unfortunately, these utterances and his occasional voiceover can’t hope to recapture the Homeric import and Old Testament texture of McCarthy’s words, without which The Road is exposed as lacking dramatic tension, a series of sequences strung together with little suspense or pacing, much less any insight into the evil in men’s souls. The abiding impression is of a genuine epic glimpsed only fitfully through the choking ash.