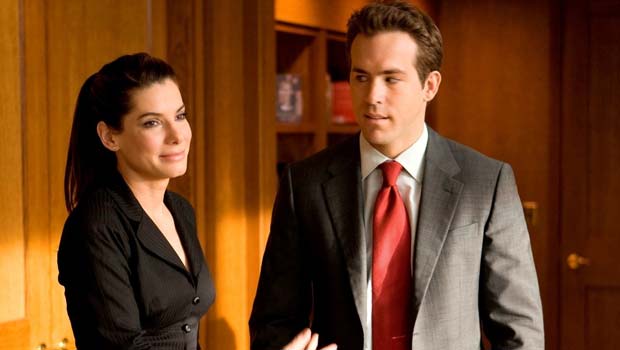 Summary: I found myself rooting for Ryan and Sandra with the kind of investment I haven’t felt in a rom-com for years.

I like to think of myself as a pretty open-minded movie watcher, but I couldn’t help feeling that the odds were stacked against the possibility of me having a good time at the cinema with The Proposal. Directed by Anne Fletcher, whose previous romantic comedy 27 Dresses I found patronising and stupid, and featuring Ryan Reynolds – who starred in the equally repulsive Definitely, Maybe – and Sandra Bullock, whose performances have steadily fallen in quality since her irresistible breakout turn in Speed 15 years ago; it seemed like a film specifically tailored to rub me up the wrong way.

So it’s with no small amount of surprise that I find myself able to wholeheartedly recommend The Proposal: it’s an enjoyable and very funny date movie. In a successful New York publishing house, Andrew (Reynolds) works as the long-suffering PA of all-work-no-play editor Margaret (Bullock). When Canadian-born Margaret is threatened with deportation she takes extreme action, forcing Andrew to pose as her fiancé in order to help her stay in the US. Unfortunately, enthusiastic immigration officer Mr. Gilbertson (Denis O’Hare) suspects fraud, so Andrew and Margaret have to substantiate their claims with a visit to his parents in Alaska.

There isn’t a single surprising element to The Proposal’s plot – you’ll know exactly how it’s going to end after the first 2 minutes – but by the time the inevitable third act crisis came around I found myself rooting for Ryan and Sandra with the kind of investment I haven’t felt in a rom-com for years. This is mostly, I think, down to Reynolds and Bullock’s great fun performances, milking the so-so script by first time writer Peter Chiarelli for all the laughs it’s worth, then adding heaps of their own charming appeal.

Fletcher places the emphasis firmly on comedy for most of the film, playing each scene for laughs as much as possible and essentially depending on Bullock and Reynolds’ likeability to sell the romance. This works, yielding consistent chuckles and several laugh-out-loud moments, ranging from the awkward extremes of the couple’s initial grilling by O’Hare, to a hilarious and touching moment of bonding over an impromptu rendition of ‘80s hip hop hit It Takes Two.

A few of the bigger comedy set-pieces fall flat, most notably an excruciating scene where the ‘cheeky Grandma’ character convinces Bullock to take part in a forest dance, but even in these moments both leads show a praiseworthy willingness to throw themselves into the moment for the sake of a laugh. They’ve almost convinced me to think twice the next time I’m tempted to pre-judge a film. Almost.