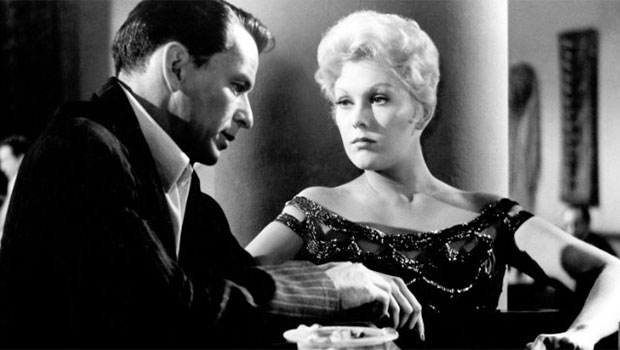 The Man With The Golden Arm Review

As the first major Hollywood film to tackle heroin addiction, The Man With The Golden Arm shocked contemporary audiences, defying a strict production code and eliciting Oscar-nominated work from composer Elmer Bernstein and star Frank Sinatra. Martin Scorsese has called it, “the first honest depiction of drug addiction on American screens,” and even today, the honesty is harrowing.

For those more familiar with his performances in musicals, Sinatra’s transformation into Ol’ Yellow Eyes is little short of a revelation. As the ex-con and card-sharp Frankie Machine, struggling to stay clean and start again as a jazz drummer, Sinatra is wholly convincing, and never more so than during a particularly disturbing cold turkey sequence. His concerned mistress and resentful wife – played by a beautifully wooden Kim Novak and over-the-top Eleanor Parker – offer less, but strong support does come from Arnold Stang, who is excellent as Sparrow, Frankie’s slightly retarded friend.

Based on a 1949 novel by Nelson Algren, the film occasionally looks dated, and director Otto Preminger’s slick style sometimes sits oddly with the gritty subject matter. But by breaking taboos, this was real shot in the arm stuff for Hollywood, breaking further ground with a (literally) unheard of jazz soundtrack. Still revered, Bernstein’s score pushes and prods at Frankie’s reluctance to do likewise, creating a tension which lingers long after the end. Brilliant, risk-taking cinema.