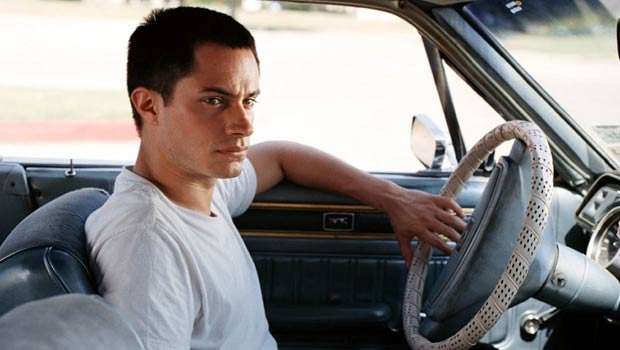 Summary: Impressively topical in looking at the teaching of creationism in schools and the influence of fundamentalist Christianity on daily life in the US of A.

Young Elvis (Bernal), recently discharged from the Navy, returns to Corpus Christi, Texas, to find the man who knew his mother many years before, and could be his father. He finds the guilt ridden David Sandow (Hurt) who is now a preacher, with a wife (Harring), a son (Dano) and a daughter Malerie (James). David is initially reluctant to let Elvis into his life – he’s a potentially threatening reminder of his own youthful indiscretions.

Elvis, however, is as stubborn as he is pretty, and he knows that if a direct approach fails, another angle can often succeed. So he sets out to charm Malerie. All she knows is that her father doesn’t want her to have anything to do with this young man, which is like a red rag to a bull for a teenage girl. She accepts lifts from Elvis, and the two start going for regular drives, and before you can say Jack Robinson they’re doing horizontal folk dancing in Elvis’ dingy motel room.

Brother Paul, frustrated by his inability to get Intelligent Design onto the curriculum in his local school, realises that something odd is going on with Malerie and makes the mistake of threatening Elvis. But this cuckoo isn’t going to let anything stand in the way of what he sees as his rightful place in the world. And when David lets Elvis into his life, the consequences are surprising and, eventually, tragic.

The King is a disturbing update of mythic tropes – the return of the king; the prodigal son – its very Greek in that sense and a feeling of impending doom hangs over the characters like the Sword of Damocles. The Father in this case is quite literally a father to the community as well as to his own children, and his initial refusal to acknowledge the return of the prodigal Elvis is a sign of his failure as a role model and leader, and his inability to live up to his own creed. When David does acknowledge Elvis, and introduces him to the community, he is guilty of hubris, smugly satisfied with his own charitable, liberal spirit, and his downfall is inevitable.

In his first English language role, top Mexican totty and ‘actor of his generation’ Bernal once again turns in a fine performance as the ambiguous Elvis, and is well matched by Pell James as the innocent Malerie. Elvis is driven by envy – this, after all, could have been his family – and a desperate desire to belong. The film doesn’t judge Elvis, but leaves that for the audience to do. It does, however, judge the Christians who struggle to practise what they preach – all fur coat and no knickers. For this failure to criticize the film has itself become the subject of some controversy but I felt that in some ways this is missing the point. This is a compelling tragedy, and in real life bad people often aren’t punished, while good people often suffer. The film also questions these definitions of good and evil, and is impressively topical in looking at the teaching of creationism in schools and the influence of fundamentalist Christianity on daily life in the US of A.