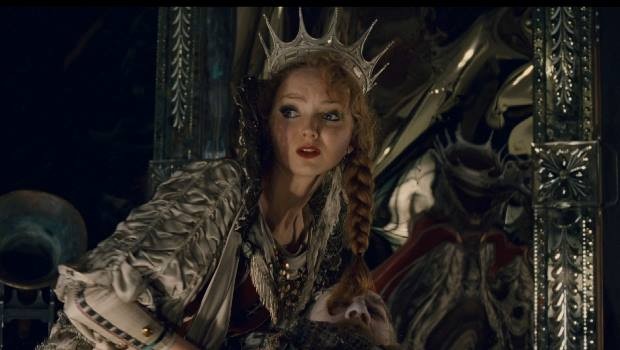 The Imaginarium of Doctor Parnassus Review

Summary: The director’s ceaseless creativity that stands out in Imaginarium, and makes the film worth watching despite its narrative and logical flaws.

The prospect of watching a Terry Gilliam film is often more satisfying than actually sitting down to experience it. He has a singular imagination and is able to come up with breathtaking visual concepts, but his films often demonstrate his weakness when it comes to threading these ideas together to produce coherent and meaningful stories. This same weakness is evident in The Imaginarium of Doctor Parnassus: Gilliam gleefully fills the screen with stunning and original images, but struggles to combine them in a way that makes sense.

While much of the attention around Imaginarium has focused on the fact of Heath Ledger’s untimely death halfway through production, the character he plays is not the central focus of the film. The story opens in contemporary London, where the titular Doctor (Christopher Plummer) is putting on a rather shambolic sideshow for the drunken post-clubbing crowd. Run by Parnassus and a handful of misfits, including his daughter Valentina (Lily Cole) and young dreamer Anton (Andrew Garfield), the travelling show appears to be little more than an eccentric diversion. That is until an inebriated volunteer accidentally steps through the mirror at the back of the stage, and it becomes clear that Parnassus has more powers than appearances suggest. “Don’t worry if you don’t understand it all immediately”, says Parnassus to a policeman who stops to see what the commotion is about, and he could well be talking to the cinema audience too.

The film trundles along, a bit like Parnassus’s rickety Imaginarium, continuously in danger of falling apart and lacking a clear destination, but curiously fascinating to watch. We discover that Parnassus hides a secret; Valentina’s life is indebted to the shady Mr Nick (Tom Waits), due to a wager Dr. P struck with this devilish figure in the past. But the reappearance of Mr Nick, keen to collect his due, is paralleled by the arrival of another mysterious stranger, Tony (Ledger, whose entrance is goulishly macabre). Gilliam brings each of these characters into the frame before ultimately, through various twists of plot, returning to the world (or worlds) behind the mirror.

Gilliam has always been a visual artist first and a storyteller second, and he conjures up some thrilling treats for the eyes here, not just in the Imaginarium sequences but also in the thousand-year-old Parnassus’s various flashbacks. But visual creativity alone does not a movie make, and often these striking and painstakingly realised images are fleetingly glimpsed and lack a narrative context to make them resonate.

So what then, of Heath Ledger’s final appearance on film? In the best performances of his short career, Ledger displayed an ability to effectively make himself disappear, so all we saw was the character. In Imaginarium this isn’t the case: we are always aware of Ledger playing a role, and his portrayal of Tony seems more like a series of sketches, as if he was still at the stage of trying out different approaches for a character that he was gradually bringing into focus. It’s a performance that is slight in comparison to his screen-burning Joker or his heart-wrenching Ennis Del Mar, but in a sense it fits well in the context of Gilliam’s film. The shifting nature of the character and the film’s fantastical tone mean it feels quite appropriate for Tony to take the form of Johnny Depp, Jude Law and Colin Farrell in the moments that he passes through the mirror. Those performances vary hugely in quality – Depp is great, Law is forgettable and Farrell disappears under the weight of the swiftly unravelling plot – but the mere fact of their presence in the film stands as a testament to Gilliam’s creative ingenuity in the face of a seemingly insurmountable setback.

It is the director’s ceaseless creativity that stands out in Imaginarium, and makes the film worth watching despite its narrative and logical flaws. The successful completion of this film may be just what Gilliam needed to spur himself on to better things; perhaps the Don Quixote film that has so long eluded him could yet become a reality.