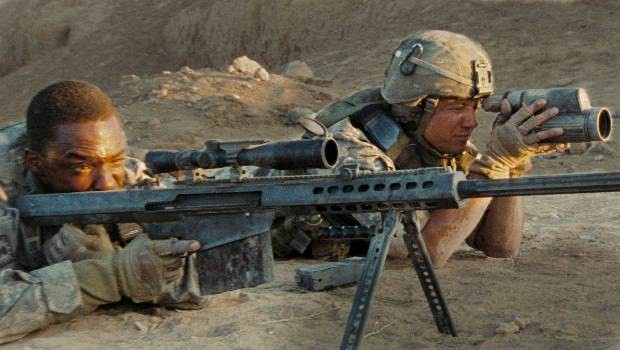 Summary: Expertly choreographed and recreated, it’s as a character study that it makes a lasting impression.

In a recent interview, Kathryn Bigelow admitted to being “drawn to individuals who find themselves in dangerous situations”. This is something of an understatement in relation to her new film The Hurt Locker, which follows a tour of duty for a team of bomb-disposal experts in Iraq; these situations are dangerous in the same way that boiling water is hot. For these men, death is an ever-present possibility, and Bigelow doesn’t let us forget it for one second of the film’s two intense hours. The characters are fictional, but writer Mark Boal spent time in Iraq following soldiers who really do this, and the film never feels anything less than authentic.

Bigelow throws conventions – and audience expectations – aside in the first immediately tense minutes of the film, as the biggest star on-screen fails to survive beyond the opening scene. With a heightened awareness that no-one in this movie is going to be safe, we meet Staff Sergeant William James (Jeremy Renner), a ‘wild man’ bomb defuser who will serve as our constant companion through what follows.

It takes a while to get a handle on where Bigelow is taking us, as for the first half of the film we get one intense life-threatening situation after another, and not much else. It’s gripping and engaging, but there is no sense of it going anywhere in particular. Of course, this is the point, as this is the exact experience of the soldiers on the ground, but an audience could be forgiven for asking “is this all there is to it?” as it hits the halfway point. Slowly, though, the interactions between the men, particularly James and Sanborn (Anthony Mackie), begin to come to the fore, allowing Bigelow to analyse their different approaches to soldiering, and question what is driving them.

The Hurt Locker has earned an ‘action movie’ tag, but while the action in the film is expertly choreographed and recreated, it’s as a character study that it makes a lasting impression. In one of the film’s final scenes James is with his infant son, ostensibly imparting a few life lessons to the baby, but talking just as much to himself. He realises that he only loves one thing – the thrill of the moment, staring death in the face – and we can confirm that to be true from what we’ve seen. The Hurt Locker opens with an onscreen quote telling us, “War is a drug”, and while we may not understand that sentiment, Bigelow shows us through this powerful film just how true it is.