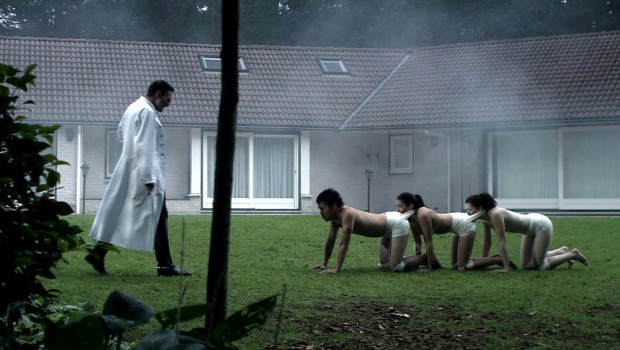 Summary: Gripping and giddy mix of exploitation and art that’s more than just a gimmicky premise.

While driving through the German countryside, American pals Lindsay (Williams) and Jenny (Yennie) suffer a flat tyre. They knock at a nearby house looking for help. Unfortunately for them, the place belongs to the insane Doctor Heiter (Laser), who drugs the women and, along with Japanese tourist Katsuro (Kitamura), uses them for his latest experiment – an anus-to-mouth monstrosity known as the “human centipede”…

The Human Centipede’s gleefully depraved premise has guaranteed the film months of publicity: the trailer has chalked up four million views to date, while the tabloids have been wallowing in mock-outrage over whether this could be the SICKEST FILM EVER MADE.

It should be said that this isn’t the sickest film ever, or even one of the sickest. Though some have compared it to Salo, The Human Centipede is neither as grim nor as grisly as Pasolini’s upsetting masterpiece (and, hey, there’s just the one scene of coprophagia!). In fact, it’s surprising just how much fun The Human Centipede is, and Tom Six’s flick is as much pokerfaced comedy as body horror.

Doctor Heiter is your classic mad scientist archetype, though Heiter is madder than most: it’s difficult to gauge exactly what medical benefits his wacky experiment is supposed to hold beyond pandering to his own warped fantasies. But Dieter Laser is a hoot. Whether he’s inviting his crackers creation to gnaw on his boot or trying to make the centipede fetch his newspaper like a faithful hound, the actor milks the role for every last guilty guffaw. Meanwhile, Williams, Yennie and Kitamura are sympathetic ‘segments’, making their nightmarish predicament feel uncomfortably believable. Jeff Bridges and Sandra Bullock may have won this year’s Best Actor Oscars, but you didn’t see them wrestling with any anus-to-mouth action, did you?

Six’s direction adds slickness to the sickness. In contrast to the majority of contemporary horrors, the visuals are bright and crisp, and the narrative unfolds slowly. But the filmmaker shows off his horror chops with a series of effective high-tension set pieces (the pals waking up in distress; doomed escape attempts; the gruesome “100% medically accurate” procedure itself) that could almost slot into an Eli Roth movie.

Aside from the rather redundant last act addition of a clueless cop duo, The Human Centipede is a gripping and giddy mix of exploitation and art that’s more than just a gimmicky premise. Of course, you can’t tell an epic story like this in just the one film: Six is currently working on a sequel that will involve 12 unfortunate victims. An unlikely new horror franchise has been born.