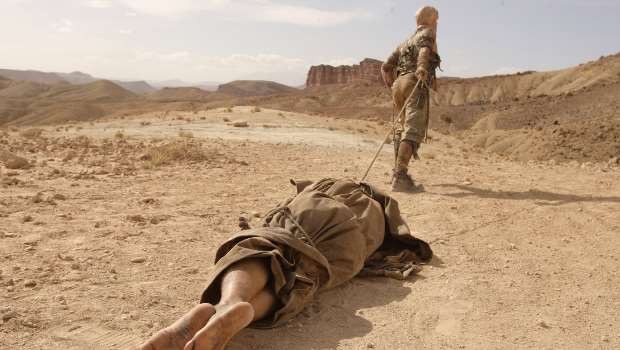 The Hills Have Eyes Review

Summary: A benchmark in the continuing reinvention of the horror genre.

The recent slew of 1970’s horror remakes has been a diverse mix of notable successes and failures that both complement and betray their predecessors. Alexandre Aja is the most logical choice for the remake of Wes Craven’s The Hills Have Eyes (1977) as, with directorial offerings including Switchblade Romance, he is a veritable old-hand at the slash-horror. In directing the remake he remains faithful to the visual motifs and conventions of the original while injecting a genuinely pulse-pounding and often horrifying ambience that makes the desert seem like the most terrifying place on earth.

Aja very sensibly stays true to Craven’s initial vision but the sheer pace and intensity of some scenes will, I fear, force many of you to make rather poorly veiled trips for additional popcorn. The sense of foreboding that is so distinctively created is ever-present from the moment the family pull up outside the dilapidated petrol station. It is the almost pitiful vulnerability of the Carter family that makes them such sorrowful fodder for the mutants from the mine and, as with Switchblade; you don’t have to wait too long for the blood and guts to start flying.

Throughout the film the director remains mindful of the fact that this is horror for a new generation and, while he is happy to acknowledge the principles of its origin, he succeeds in making a genuinely distinctive film. As with other markedly promising remakes of 1970’s horror such as Zak Snyder’s Dawn of the Dead, Aja’s The Hills Have Eyes is very much a faster and more ferocious animal.

After taking a rather ill-advised short-cut through an abandoned military test site, the Carter family fall foul of a posse of heavily mutated miner’s children (the result of American nuclear testing on the area). It’s made clear that these guys have been in the killing business for some time and have obviously become quite adept at it so it’s no surprise that they make rather short work of Mr and Mrs Carter played by Ted Levine and Kathleen Quinlan. This leaves their brooding teenagers Brenda and Bobby Carter (Emilie de Ravin and Dan Byrd) to fight off the rampaging hoard along with Doug (Aaron Stanford), the husband of their recently slain sister.

Both Bobby and Brenda lend a hand in laying somewhat implausible booby traps for their assailants but it is Doug who takes on the mantle of action-hero. In delivering a surprisingly convincing performance Stanford steals the show as Doug is forced to chase the mutants back down the mine following their abduction of his daughter. Somewhat like Alice tumbling down the rabbit hole Doug re-emerges in a freakish wonderland where the true extent of the radiations effect on the local inhabitants is revealed. It is here that the excruciatingly gruesome work of special-effects make-up artist Howard Berger (Sin City, Hostel, Serenity) takes centre stage in some of the most horrific creations to have graced the big screen.

Aja creates a masterful symphony of terror where the frantic attacks on the bewildered Carter family are punctuated only by eerie lulls in the blood-shed that involve darks places and unsettling quiet (real hide behind your jumbo cola moments). The many forms of horror employed fritter playfully on the border of out-right distaste but not so much that you won’t buy the DVD and sit and watch it on a lazy Sunday afternoon.

The spectacle of horror is almost an art form for Aja and the high points of the film include the family’s poor pooch being gutted by a hungry native and Daddy Carter going down in a blaze of glory. In short, The Hills Have Eyes represents not only the directors deserved arrival onto the big stage but also a benchmark in the continuing reinvention of the horror genre.

Alternative review:
The Hills Have Eyes by Paul Greenwood