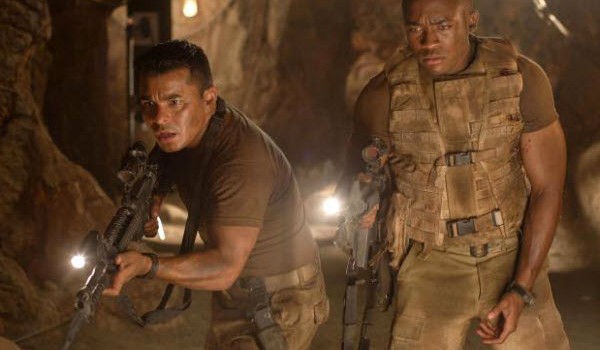 The Hills Have Eyes 2 Review

Last year’s remake of The Hills Have Eyes took everyone by surprise. Alexander Aja faithfully recreated Wes Craven’s 1977 classic, while still lending it a contemporary edge. With some frankly terrifying teasers and evocative poster art, there was hope that this hastily produced sequel might prove equally powerful. Unfortunately, despite some nasty moments, it’s far too shouty and clichéd to really cut it as an effective nerve-shredder.

Wisely ignoring the original Hills Have Eyes 2, the script (by Wes Craven and his son Jonathan) begins like a more youthful version of Aliens as a group of National Guards head to the hills for a training exercise. After discovering a deserted camp, the fresh-faced kids find themselves under attack from a terrifying family of cannibals, and the whole thing settles down int The Descent territory for the cave-set final act.

There’s nothing wrong with liberally borrowing from Aliens or The Descent of course – many horror movies thrive by borrowing elements from others in the genre – but The Hills Have Eyes 2 can’t help but suffer in comparison. Aliens worked because it was more than just about the monsters. There were well-defined characters and even the dumbest lines were memorable. Here, there are too many characters and not enough characterisation, with the result that the cocky kids just become interchangeable cannibal-fodder. Some dialogue that ventured beyond gung-ho obscenities would have been nice, too.

Music promo director Martin Weiz has a fair crack of recreating the agoraphobia-inducing setting of Aja’s movie, and his film is slickly shot and edited. But what Hills 2 lacks is any real off-kilter ambiance. Sure, it’s often unflinchingly nasty (not least in the sucker-punch opening sequence), but it is rarely shocking. There is nothing here to match the unsettling sight of the mutants creeping into the family caravan in the original movie. Instead it just develops into a fairly standard stalk ‘n’ slash, with radiation-blasted cannibals taking the place of a psycho.

It isn’t bad enough to have audiences running to the hills, though. There’s a strong, atmospheric score from Trevor Morris (the weird bleeping sound from the first movie even becomes a plot point in the final scene!), and the breakneck pace means that it never gets boring. But with Craven on scriptwriting duties and a reasonable budget to play around with, horror aficionados might be forgiven for expecting a little more