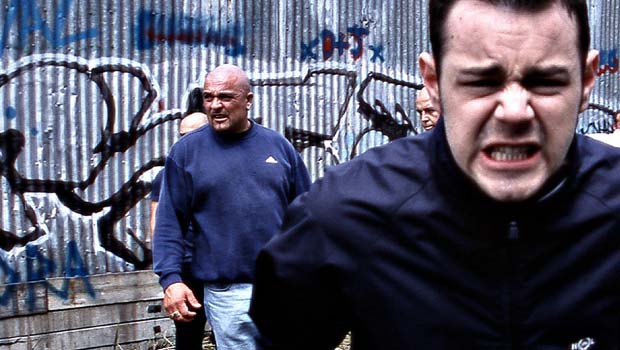 Published in 1996, John King’s novel Football Factory was a gripping insight into the mind of a 1980s football hooligan. Deranged but believable, it raised issues of class, race, tribal allegiance and the masculine capacity for violence. Eight years on, the Taylor Report and tighter policing have altered the ugly face of the beautiful game, so while the violence still exists, updating King’s narrative to the present day without any kind of contextual scene-setting leaves Football Factory looking and sounding anachronistic. The Burberry and trainers uniform haven’t changed and neither have the ‘fackin’ carnts’ wearing them. But there’s something almost quaint about the fights here, an insidious nostalgia for the kind of mob clashes settled away from the stadiums nowadays.

Narrator Tommy Johnson (Danny Dyer) is part of the infamous real-life Chelsea firm, the Headhunters. With best friend Bob (Neil Maskell), guv’nor Harris (Anthony Denham), teenage pikey Zeberdee (Roland Manookian) and a supporting cast of assorted scum, he lives for away days to rival firms like Cardiff, West Ham and Millwall. Especially Millwall. His mentor in psychosis is the ironically named Billy Bright (Lock, Stock and Two Smoking Barrels’ Frank Harper), and to Tommy, it’s all one big adrenaline rush. In a whirl of drugs, shagging and casual violence, there’s barely a football kicked, and his lifestyle is contrasted with that of his granddad (Dudley Sutton), railing at the selfishness of the younger generation. But cocky though he is, Tommy is mentally unravelling and has premonitions of a savage beating at the forthcoming cup-tie at Millwall.

Any hooligan drama will suffer comparisons to Alan Clarke’s gritty The Firm and Philip Davis’ ID, but director Nick Love’s choice of Trainspotting-style flash makes Football Factory seem distinctly lightweight and infatuated with its subjects. A self-aware narrator backed by a pumping Brit soundtrack now seem rather hackneyed, and Tommy’s choosing of life kicking life seems less like a defiance of society than a failure by the filmmakers to engineer a more satisfying ending. There’s endless macho posturing, particularly from Harper, to the point of tedium, slowing the narrative down when a scene has long outstayed its welcome. The yobs rarely rise above caricature and the device of Tommy’s wartime hero gramps is as half-arsed a social critique as any committed to celluloid.