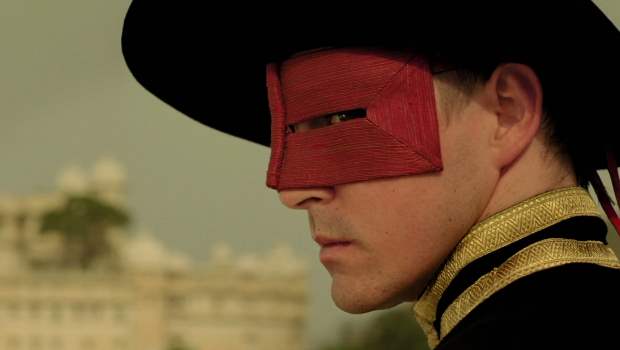 Summary: The film’s stunning visual quality, from the gorgeous black and white opening sequence to the dazzling blue city of the story’s finale, is a genuine wonder to behold, truly like nothing you will have seen before.

Completed in 2006 but floundering in an unreleased netherworld ever since, music video director Tarsem Singh’s self-financed second feature (the first was the much-maligned Jennifer Lopez starrer The Cell) deserves to be seen on the biggest screen possible. It’s a breathtaking, exciting, humorously self-aware movie that is both epic and intimate, and the ‘produced by David Fincher and Spike Jonze’ credit that opens the film is more than just a celebrity name-drop; there are traces of both directors’ originality and invention in The Fall’s confident sweep as well as its dark undercurrent.

Tarsem – he prefers to not use his surname – is known for being a master at visuals but not so hot at actually telling stories, so the fact that The Fall takes storytelling as its central motif is either his way of taking his critics head-on, or just a sign of sheer bloody-mindedness. Whatever the reason, the result is wonderful cinema.

It’s 1920s Los Angeles. Lee Pace plays Roy, a hospital bed-bound stuntman who is also just a little heartbroken and suicidal. He is befriended by Alexandria (Catinca Untaru), a 9-year old girl also stuck in the hospital as a result of a fall, who convinces the unenthusiastic Roy to tell her a story. This Princess Bride-esque set-up gives Tarsem the opportunity to let his imagination go wild, and he creates some amazing visuals, covering a multitude of real locations, as Roy spins his yarn.

Several elements come together to make the film great. The first is the natural chemistry between Pace and Untaru: when we watch them talking together it really feels like we’re eavesdropping on a totally unrehearsed situation. Untaru occasionally stumbles over lines or seems to not really be paying attention to Pace; she is so clearly not a professional actress that all we get is her raw life and charm, and it works – she’s adorable. Equally effective is the way Tarsem blurs the line between the fantasy world of Roy’s story and the real world of the hospital. This allows for plenty of witty asides from characters within the story, but also crucially means that come the conclusion, when we really need to care about how things are going to end, the fantasy story has strengthened our understanding of what is at stake in reality, making for a gripping and satisfying finish.

Added to these pleasures, the film’s stunning visual quality, from the gorgeous black and white opening sequence to the dazzling blue city of the story’s finale, is a genuine wonder to behold, truly like nothing you will have seen before.

It should be noted that, despite the earlier reference to The Princess Bride, the film is not a ‘family’ movie in the same sense, as it features some strong violence in the fantastical sections and dwells on themes of suicide and despair in the real world segments. This is a sign that Tarsem made the film he intended to without any concessions to audience expectations, but it also perhaps explains the lack of ease with which The Fall obtained distribution. It is not likely to hang around in cinemas for too long, so if it’s playing near you, don’t think twice; treat your eyes and heart and take in The Fall.