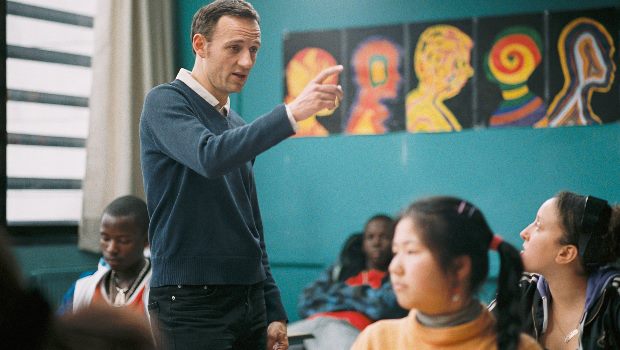 Summary: I can say without hesitation that this is one of the best films I have seen in a while.

Laurent Cantet’s docu-drama set in a tough Parisian school was a worthy winner of the Palme d’Or at the Cannes film festival last year, and is a serious contender for an Oscar in the foreign language category.

The film is based on Francois Begaudeau’s compelling book about his real life experiences as a teacher in a multi-racial school in the French capital. Begaudeau himself plays the lead as he battles to control a classroom of 14 and 15 year old kids from varying backgrounds. Begaudeau and Cantet (along with co-scriptwriter Robin Campillo) decided to use real students to play the characters and they were allowed to improvise several scenes making the whole film feel like a documentary.

The camera rarely leaves the classroom, so we are forced to make judgements of the students and the teacher simply based on the way they behave within the four walls (Entre Les Murs). We are instantly introduced to a smart student from China called Wei (who we later find out is an illegal immigrant), a troubled boy from Mali called Souleymane, a confident, loud mouthed girl called Esmerelda, a smart, sulky girl called Khoumba, and several more, each with their own distinct characteristics. However, background stories are only brought to light at the end in dramatic fashion when Souleymane is threatened with expulsion from the school and as a result his whole family could be deported.

Our sympathies mostly lie with Begaudeau’s role as the teacher who does an admirable job keeping some semblance of order to proceedings, while also allowing the students to freely express themselves. He is often challenged on his teaching methods as he attempts to get them interested in words, language and verb tenses. His efforts at getting across the imperfect subjunctive, for example, are met with derision by the students whose ways of speaking differ greatly from Begaudeau’s.

There are some genuinely funny exchanges between the students and with the teacher who gradually gains their respect. However, this is no Dead Poet’s Society. The moments of comedy are equally matched with some very serious situations where violence and abuse break out, and one scene in particular where the teacher is challenged by the students in the playground is actually quite shocking and uncomfortable viewing.

The beauty of this film is the fact that it is presented in a very simple, no holds barred manner and yet it also reflectes some major, wider concerns prevalent in France at the moment. There are several immigrants in the country who feel they are not getting their voices heard and are being pushed to the fringes of society. This film is a brave attempt to make not only the French, but hopefully audiences worldwide, understand and appreciate the complexities, but also the thrill and enjoyment of mixing cultures together in one place.

Fortunately Cantet avoides the cliched, Hollywood approach and tackles these meaty issues without the need to over explain or ellaborate their importance. Begaudeau and the students pull off superb performances and I can say without hesitation that this is one of the best films I have seen in a while. Few movies have left me in awed silence after I’ve seen them, but this is certainly one of them.