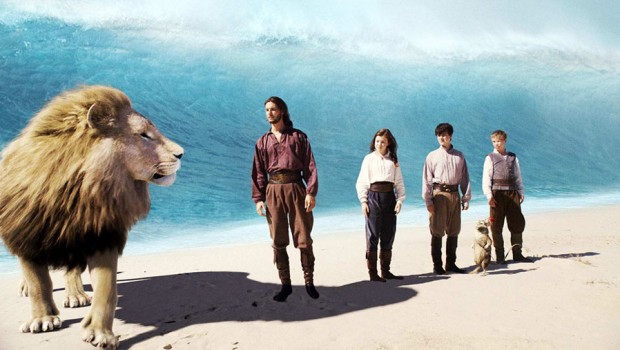 The Chronicles of Narnia: The Voyage of the Dawn Treader Review

Summary: A a fun and exciting (but not too scary) time at the movies for kids.

C.S. Lewis’s Narnia books set a particular challenge to filmmakers and audiences who are accustomed to film series that tell a single continuous story (Lord of the Rings, Harry Potter, Twilight etc.). The constant factor in Lewis’s seven books is not the story but the location, and each book tells a story that, as well as being a stand-alone adventure, increases the reader’s understanding of what kind of world Narnia is. Director Andrew Adamson did a pretty good job of transferring the basic stories of The Lion, the Witch and the Wardrobe (2005) and Prince Caspian (2008) to the big screen, but both of his films failed to really explore or in any way explain Narnia, beyond the initial revelation of it being a wonderful, magical place.

For this third trip there’s a change of personnel behind the camera as veteran director Michael Apted takes over from Adamson (who now oversees in a producer capacity), but while Apted ensures that Dawn Treader features a lot more exploring of Narnia, there still isn’t much explaining; logical plot progression is decidedly not one of this story’s strengths. To be fair, the point of the magic of Narnia is that it is mysterious and inexplicable, but for much of the time in Dawn Treader there is not even a clear explanation as to why the Pevensie children have been summoned to Narnia once more.

The story begins with the two younger Pevensies, Edmund (Skandar Keynes) and Lucy (Georgie Henley), being transported to Narnia in spectacular fashion, through a magical picture frame, with their spoiled brat cousin Eustace (Son of Rambow’s Will Poulter) in tow. Once there they find themselves on board the Dawn Treader, the longboat captained by Prince Caspian (Ben Barnes) with the able assistance of swashbuckling mouse Reepicheep (voiced by Simon Pegg, replacing Eddie Izzard) and his crew. Caspian is on a quest to find seven lords who were banished during the reign of tyrannical King Miraz, and invites the children to join him. From there the story unfolds as a series of smaller stories, each taking place on a different island in Narnia and involving one of the characters having to overcome a specific personal temptation in order to succeed.

There is fun to be had with this story, and Apted doesn’t try to disguise its freewheeling nature. In fact, the character of Eustace spends much of the first half of the film incredulous at the increasingly far-fetched turns of events, a function that Poulter carries off pretty well (until a particularly crazy twist literally transforms his performance). But more so than the previous two films, Dawn Treader is a film that is best-suited to younger audiences. With its simplistic moral boundaries, episodic story and broad characterisation, it’s not a film that has anything like the thematic weight of The Lion, the Witch and the Wardrobe, but what it does offer is a fun and exciting (but not too scary) time at the movies for kids.