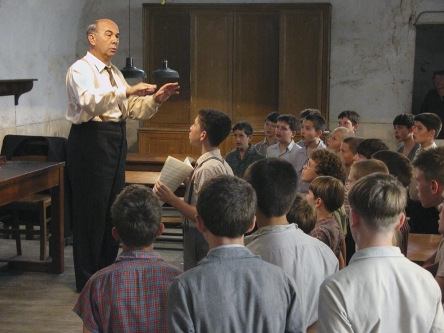 Mr Holland’s Opus in French anyone? Anyone? If the very idea fills you with a numbing sickness and dread (and it should) then fear not. The Chorus (or Les Choristes in its homeland) may follow the well-trodden path of inspiring teacher features past, but this Oscar-nominated movie is so well made and downright entertaining that you can’t help but be sucked in by its Gallic charms.

It’s 1949 and the Fond de l’Etang boarding school in rural France is operated under the austere hand of principal Rachet (Berleand). The school’s mantra of ‘Action-Reaction’ faces something of a challenge with the arrival of chubby-faced new supervisor Clement Mathieu (Jugnot). Rather than adhering to the system of rigorous discipline that the assortment of troubled kids have become accustomed to, Mathieu instead prefers to try and understand their problems and inspire them through his love of music. At first the kids are wary, but it’s not long before he’s won their respect by binding them together in a school choir (I’m not sure this method would have worked at my school, but I guess life was different in 1940s France). The atmosphere around the school slowly starts to transform – the kids become invigorated with a new lease of life and even Rachet is tossing paper aeroplanes around his office – but it can’t stop other pressures conspiring to topple Mathieu’s ambitious plans.

You can try to hate The Chorus. It’s been almost religiously put together for an international market, combing the quaint, picture-postcard rural lifestyle with one of the oldest plots in the book, and for anyone who’s seen The Blackboard Jungle, Dead Poets Society and a million other movies (yes, including the dreaded Mr Holland’s Opus), this film won’t contain a single surprise. Has anyone actually met a teacher like this? Perhaps to pad out the running time the film also comes saddled with a couple of entirely unnecessary book-ending sequences, and there’s a rabid desire to wrap everything up far more neatly than is actually required (Lost Highway it ain’t). But only the hardest heart could fail to enjoy this movie. The endearing Jugnot is perfect as the persistent, placid Mathieu while Berleand compliments him well as the mean-but-not-too-mean Rachet. The child cast too miraculously manage to be a likeable collection of ragamuffins, with the angelic-looking star pupil Morhange (played by Jean-Bapiste Maunier) wisely being infused with a wayward side to offset potential annoyingness. It also contains possibly the most convincingly evil child in the world in the character of Corbin, played by Thomas Blumenthal. If – God forbid – there should ever be a fifth Omen movie, they should definitely bear Blumenthal in mind.

Thanks then to the basics being in order – a decent leisurely-paced script, top-notch performances, radiant cinematography – The Chorus is an addictively charming little movie. It all adds up to a film that you’d be happy to take your gran along to see without causing any lasting discomfort on your behalf. Unlike, say, Mr Holland’s Opus. Okay, I’ve probably been mean enough about Mr Holland’s Opus now.