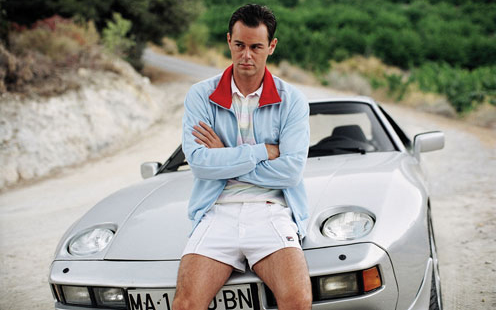 Summary: For anyone with an unwavering dedication for gangster flicks and the attention span of a six-year-old this is likely to make for straight-talking fast-moving fun.

Just when you thought that the British gangster movie might finally have admitted defeat along comes The Business with an unapolegetic swagger. Here Nick Love, the director behind The Football Factory and Goodbye Charlie Bright, tries his hand at the much-maligned genre. And if he doesn’t entirely avoid genre clichés (and indeed often openly embraces them) he still manages to offer up a fast-paced, resoundingly populist little movie that’s sure to find its natural audience on DVD.

Set in the late 80s, the gangsters on display here are ex-pats who have escaped the grime of London streets for the sunny climes of the Costa Del Sol. But aside from the sun and sangria it’s business as usual – a business of drugs, deals and occasional outbursts of violence. Into this scene arrives fresh-faced Frankie (Dyer), on a job delivering “biscuits” to smooth-talking nightclub owner (and all-round tough-guy) Charlie (Hassan). It’s not long before Frankie has become intoxicated by the world of money, fast cars and excitement and, under the watchful eye of Charlie, he decides to stick around. But, as anyone with half a brain could anticipate, greed, jealousy and desperation threaten to tear apart the life of luxury that the sun-tanned hoodlums have built for themselves.

The idea of British gangsters hanging out in Spain immediately brings to mind 2000’s Sexy Beast, but in fact The Business shares very little with Jonathan Glazer’s much more ambitious movie. It’s actually the American gangster pictures that seem to have been more of a direct influence on Love’s film. The beginning sequence is a clear homage/steal from the much-imitated opener of Goodfellas (with Frankie freeze-framed mid-job while his voice-over scoffs “Better to be someone for a day than a no one for a lifetime”), while elsewhere you can feel the obvious stamp of multiple viewings of Carlito’s Way and Scarface. A stylised morality tale is the order of the day here rather than any kind of Get Carter-style attempt at bleak realism (although bearing in mind The Business’s finale maybe this isn’t such a morality tale after all).

Of course The Business is a much lower-budget and more straightforward movie than the likes of Goodfellas. And with dialogue like “His fucking bed made itself in the morning…that’s how cool he was” you can’t exactly accuse The Business of pretension. Unfortunately, like many British gangster movies, you can’t accuse it of having a witty, clever script either with grown men yell “ya fackin’ caaant!” in an east-end accent constituting about eighty per-cent of the dialogue.

But if you approach it in the right frame of mind The Business does have a lot going for it. Most of this is down to the unusual and often amusing 80s backdrop. The movie is interspersed, though never too obviously, with icons of the era and events are played out to a constant synth-led soundtrack of Duran Duran, Frankie Goes to Hollywood and, in one memorable sequence, The Buggles. This 80s backdrop is perhaps supposed to mirror just how shallow and superficial the lives of these characters are (not to mention the ‘greed is good’ philosophy of the time) but it also seems rather fitting for a movie that itself is unashamedly lacking in substance.

Love’s film also looks great (especially in its first half), bursting at the seams with a unique colourful visual style of blue skies, bright sports tops and brighter cars, and does suggest that he has a style that might just translate into much bigger and better things with the right kind of budget.

The Business is a simplistic, brash and noisy addition to the British gangster genre, but it’s never under any illusions as the kind of movie it is. For anyone with an unwavering dedication for gangster flicks and the attention span of a six-year-old this is likely to make for straight-talking fast-moving fun.

Director Love and star Dyer aren’t short of a thing to say (usually foul-mouthed) on the movie commentary. Whether you find them incredibly irritating company or not depends on your point of view, but at least it’s free from the tumbleweed-inspiring pauses of so many commentaries. Love shrewdly observes that this is a movie aimed squarely at a certain audience and that some critics will dismiss it as a “wall of noise” (prompting ‘wall of noise’ dismissal to be deleted from above review). “This isn’t a movie for Guardian or Independent readers!” Love insists; The Sun and News of the World subscribers need only apply here.

The Behind the Scenes documentary is equally as raucous. Yes, the cast and crew do come over as rather obnoxious (and often not a million miles away from their on-screen characters), but again at least it’s not the usual staid filler that these things consist of. It even includes (presumably genuine) footage of on-set conflict, with the set designer snarling of Love “I don’t think Nick’s aware that this is a low-budget movie!”

Other extras include a preview of Love’s new film Outlaw, production design stills and deleted scenes.