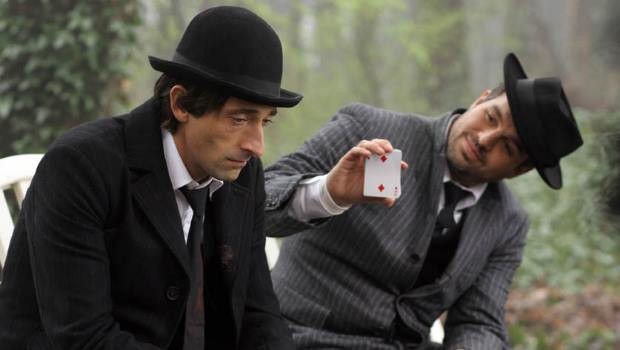 Summary: For an amusing diversion on a Saturday evening this is ideal, but if you’re looking for a cult classic this is not your ticket.

This is a far cry from Johnson’s directorial debut, Brick, a disturbing murder drama set in a high school, which picked up several awards, including the Special Jury Prize at Sundance back in 2005.

In The Brothers Bloom we are thrown into the deliberately confusing and relentless world of two con artist brothers, Stephen (played by Mark Ruffalo) and Bloom (Adrien Brody) as they travel across Europe conjuring up ever more adventurous scams. Pulling the strings the whole time is older brother Stephen, while Bloom becomes ever more dejected playing the put upon protagonist in his games, something he has been doing since they were young orphans.

The plot thickens when eccentric New Jersey heiress Penelope (Rachel Weisz) enters the fray as a lonely hermit living in a vast castle desperate for some adventure in her life. Spotting what they think is an easy target, the brothers persuade her to join them in a scheme that involves the theft and re-sale of a priceless old book.

There are some entertaining and amusing scenes that follow as we are left guessing what is real and what isn’t. To confuse matters further, extra characters are thrown in from left field, such as Diamond Dog (Maximilian Schell), the brothers’ double-dealing mentor in con artistry, the Curator (Robbie Coltrane), a smuggler of Belgian antiques, and Bang Bang (Rinko Kikuchi), a mute sidekick who is intent on blowing everything up.

It is easy to get taken along for the ride, the backdrops are stunning and Weisz and Ruffalo are clearly enjoying themselves, while Brody projects the soulful anxiety of a man longing to live an unscripted life very well.

However, the film failed to leave an indelible impression on me due to it’s almost cartoonish nature and lack of true emotional depth. Johnson attempts to match the heights of Ocean’s Eleven with clever crime capes and amusing dialogue, alongside a quarky, offbeat style in the mould of say The Life Aquatic With Steve Zissou, but sadly falls short of the quality of both those films.