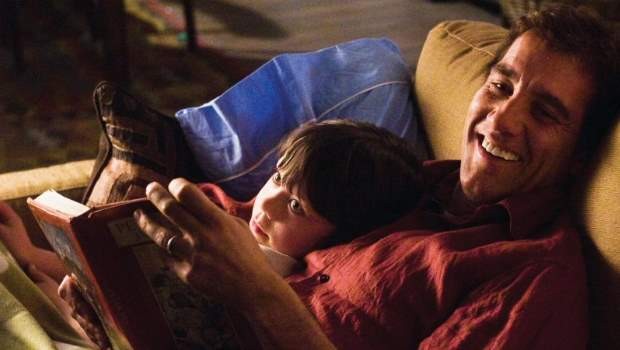 The Boys Are Back Review

Summary: Although the story is one with high stakes, it never has a sense of genuine drama.

The title is misleading, as it’s not actually the boys who have gone missing; it’s the girls. In fact, it’s one girl in particular, Katy, who tragically dies of cancer at the start of this story, leaving the grieving and clueless Joe to raise Artie, the 6-year old son he hardly knows. It’s a traumatic and potentially devastating opening, but director Scott Hicks grounds its telling in matter-of-fact reality rather than initially dwelling on the heart-tugging potential. This is based on a true-life story after all, and the thing about real life is that it keeps on going.

The question for Joe is how he and Artie will keep going, and the answers he comes up with – adopting a ‘just say yes’ policy to parenting and resolving to become everything that Artie needs – allow Hicks to celebrate manly “hog heaven” living while also effectively presenting Joe and Artie as two boys who don’t know how to express themselves to each other. Their stumbling attempts to achieve domestic harmony are further complicated by the arrival of Harry, Joe’s teenage son from his first marriage.

Clive Owen, the film’s star, is not an actor of great range; no matter what movie he’s in he always looks the same and talks the same. But he has powerful screen presence and can imbue lines with genuine movie star gravitas, and in this respect he is rare among British leading men – there aren’t many others who could reasonably hold their own opposite Julia Roberts with star-wattage on full beam, as Owen did in last year’s Duplicity. His performance as Joe in The Boys Are Back not only gives the film a strong emotional centre but also keeps it out of overly sentimental territory. Alan Cubitt’s screenplay offers plenty of moments that a less confident actor would milk for emotional impact, but Owen doesn’t go for these easy options, he holds back, and the character is all the more believable, and the story more truthful, for it.

That’s not to say that the film is without flaws. Hicks combines beautiful cinematography and overly intrusive music to create a very safe atmosphere, so although the story is one with high stakes, it never has a sense of genuine drama – we never doubt that things will be okay by the time we leave the theatre. A little more tension and some stronger crisis points would have made this a more realistic tale.

But Hicks, who guided Geoffrey Rush to the Best Actor Oscar in his most notable previous film, Shine, is obviously very good at judging how to get the best from his actors, and deserves a lot of credit for creating two very believable father-son relationships in this film. In particular, the development of Joe’s relationship with Artie is moving and genuine, as we follow them from virtual strangers to something like brothers to a strongly interdependent father and son.