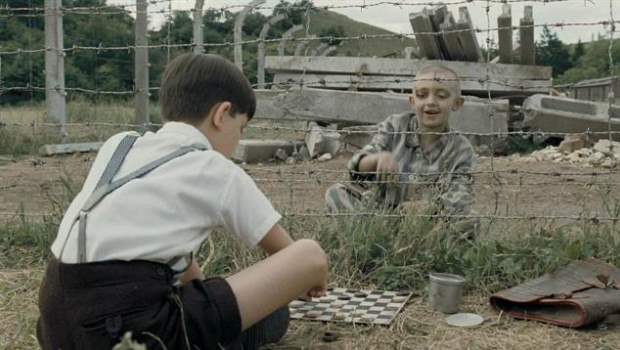 The Boy in the Striped Pyjamas Review

Summary: The Boy in the Striped Pyjamas may seek to provoke uneasy questions about humanity, but it goes about it in a way that places the film’s own moral accountability on very shaky ground.

This film must have seemed like a good idea on paper. Literally, in fact, as it is adapted from a novel by John Boyne that impressed a lot of readers, and director Mark Herman (Little Voice) was clearly among them. But what worked in book form as a child’s-eye fable on the atrocities of the Holocaust has not translated effectively to the screen; the end result is a film that is at best a failed curio, at worst something much more troubling and morally dubious.

Beginning in Second World War-era Berlin, the story centres on Bruno (Asa Butterfield), the 8-year-old son of a high-ranking Nazi Commandant (David Thewlis) who, as the film begins, is moving his family out of the city to be near a ‘new project’ that he is overseeing. We quickly understand that this project is a concentration camp for Jews, but that Bruno has no concept of this, knowing only that his father is a good man who works to help people. The film is mostly told from Bruno’s perspective, and we follow him as he first glimpses the camp’s fence from his new bedroom window, then covertly goes exploring to find out more.

Once at the fence he meets the boy of the title, a Jewish child named Schmuel (Jack Scanlon) who begins to describe to Bruno what life in the camp is like. Their conversation is on simple terms, and Bruno’s view is naïve enough that he has no concept of what is at stake in the camp. As the film progresses Bruno begins to understand firstly that there may be a problem with him having a Jew as a friend, and secondly that life in the camp may not be as rosy as it initially appears to him.

It is easy to see why this set-up, with its unique perspective on this most weighty and terrible of historical events, would be appealing to a filmmaker, but Herman’s film has major problems. He has chosen to have all the actors speak English in very proper accents, perhaps in an attempt to make the film both accessible and provocative, but it gives an air of unreality from the start and makes it unclear on what grounds we are supposed to take the film; an attempt at a real historical narrative or something else, more metaphorical? This question is never satisfactorily resolved by the film and means that its intentions remain unclear.

This is the larger problem. No discussion of The Boy in the Striped Pyjamas can leave out its ending, which will undoubtedly be the most talked-about aspect of the film. Without giving away details, it is enough to say that it is shocking, unexpected and quite terrifying. While this would usually be a good thing – Frank Darabont’s The Mist recently showed how such an ending can be powerfully effective – in this instance, the subject matter being what it is means we must ask why; what is the filmmaker’s purpose in presenting this ending to us? As already noted above, the grounds on which the film is approaching the historical events is unclear, so when it comes to the ending, it is difficult to see what the larger purpose of the film is, apart from sheer emotional impact. This being the case, it skirts dangerously close to using a real, terrible, complicated piece of human atrocity as nothing more than a plot device; provoking serious emotion with no greater purpose than the feeling itself. Audiences will walk out ‘feeling’ that they have seen something worthwhile and important, which seems a little too much like manipulation when there is nothing of weight going on under the film’s surface.

This is not to say that the work of the cast and crew is not of quality; it is, but the question of what it amounts to can not be so satisfactorily answered. The Boy in the Striped Pyjamas may seek to provoke uneasy questions about humanity, but it goes about it in a way that places the film’s own moral accountability on very shaky ground.