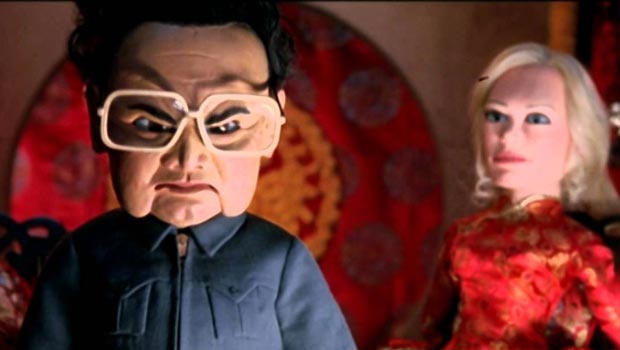 Summary: If the writers are going to be endlessly infantile and dismissive about heavyweight issues, please God, at least write some decent jokes.

If Trey Parker and Matt Stone set out to offend with this film, then they’ve succeeded. It’s a shallow, sneering con of a movie that crucially isn’t very funny. Doubtless it’ll have its defenders and even fans, but they’re morons.

Writing as someone who cried with laughter on hearing the Unclef*cker song in South Park: The Movie, at least the first time, I couldn’t have been more disappointed with Team America: World Police. With hubris that would be laughable if it wasn’t symptomatic of something so terribly askew, Parker and Stone threatened not to make this film for Paramount if it wasn’t released before November’s US presidential election. This from a pair who maintain there’s no shame in not voting. W*nkers. Egotistical w*nkers. When History reflects upon George Bush’s legacy, that this film was held up as satire or even entertainment during his tenure demonstrates what a sad, useless machine for criticism Hollywood is.

The plot, such as it is, sounds promising: a self-appointed team of trigger-happy American yahoos out to save the world from the threat of terrorism. Thunderbird-like puppets equipped with an arsenal of rockets, jets and helicopters that launch from a secret base in Mount Rushmore, they avert an Islamic bomb threat in Paris but flatten the city in the process, losing one of their members. Regrouping, the team’s leader Spottiswoode recruits a Broadway actor, Gary (voiced by Parker) as a replacement – his acting skills as seen in the show Lease (‘Everyone Has AIDS’), making him the perfect undercover operative.

When they discover terrorists are planning to meet in a bar in Cairo, the team escort Gary, crudely altered to look Middle Eastern, to infiltrate the cell. But his cover is blown and all hell breaks loose, Team America wiping out the bad puppets and levelling the Pyramids. It turns out however, that the real threat comes from North Korean leader Kim Jong Il (also Parker). He plans to unleash “9/11 times 2,356”.

All of which is rendered in a crude parody of gung-ho Jerry Bruckheimer movies. There are the big explosions, gun battles and ridiculous human drama: Gary walking out on the team, hitting rock bottom, having a crisis of conscience and returning to save the day. The only problem is, your average Bruckheimer movie is (unintentionally) far funnier and Team America’s attempts to demonstrate the creaky hilarity of such blockbuster sequences with the rudimentary technology of puppets is a tame gag at best. The obligatory sex scene between Gary and another member of the team, Lisa is initially amusing for its novelty and Gary’s marionette lack of equipment. But like many of the jokes, it outstays its welcome. A scene where Jong Il feeds Hans Blix to his shark is potentially the most pointless, predictable Bond-parody yet committed to celluloid.

To be fair, some of the musical numbers (America! F*ck Yeah!) are amusing, and credit for criticising the liberal lobby too, in the form of America’s more right-on actors like Tim Robbins and Sean Penn. But taking the piss out of both the doves and the hawks (though curiously there’s no Bush or Rumsfeld. Are they supposed to be the unseen puppet masters? Or has this film no real balls at all?), makes Team America seem much less nihilistic than boringly immature, with absolutely nothing to say. Michael Moore as a suicide bomber? Please explain the humour in that. Film Actors Guild = F.A.G. Yeah, if you can’t get ‘em with the satire, pile on the cheap homophobia. Relentlessly.

Ok, so the film’s final message about people being dicks, pussies and arseholes is actually inversely clever and went a long way to excusing what had gone before. But if you’re going to be endlessly infantile and dismissive about heavyweight issues, please God, at least write some decent jokes.