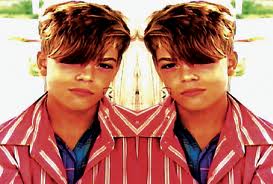 Robert Rodriguez famously scraped together El Mariachi for just $7000, but it seems like a Titanic-sized extravagance when compared with Tarnation’s $218 production values. Jonathan Caouette’s autobiographical documentary was put together from hours of home footage and edited using free, non-professional Apple imovie software – which in theory should make for a commendable but unwatchable little movie. So it’s some achievement that, while flawed, Tarnation makes for fascinating viewing, and explains why Gus Van Sant was so keen to sign on as Executive Producer (whose clout no doubt helped to pour far more money into publicising the film).

Tarnation is basically an attempt by Caouette to recount the story of his strange, troubled life and the even stranger world around him. Opening with footage of him learning that his mother Renee has been hospitalised by a lithium overdose, the film delves back in time through a dazzlingly array of visual devices to explain the turbulent history up to this point. Through photographs, title cards, home movies and a large dose of pop culture we witness Renee’s journey from childhood model through to a life of abuse, electro-shock therapy and bipolar disorder. At the same time we observe Caouette come to terms with his homosexuality and face his own psychiatric trouble in the form of ‘depersonalisation’, an experience of detachment from the sufferer’s own life.

Imagine if Paul Morrissey had directed Capturing the Friedmans, and you’re halfway to understanding what Tarnation feels like. Stylistically, no trick is left unturned as the movie throws in an alluring kaleidoscope of colours, images and sounds. Thankfully this isn’t style just for the sake of it, with the movie’s psychedelic imagery attempting to convey the disorientating effect of depersonalisation to the viewer. In its streamlined 88 minutes (cut down from a three hour version originally submitted to the MIX Film Festival) the film manages to tackle issues of truth and memory, forging identity and a Kerouc-style pursuit of experience. Rest assured, this is a movie likely to end up on many a film studies course.

It has to be said that not everybody will warm to Tarnation. It’s rather self-indulgent at times, as you might expect from somebody bold enough to make a movie about his own life, and lacks the outsider’s perspective that Andrew Jarecki gave Capturing the Friedmans. From the title cards that refer to himself in the third person to over-extended home footage of him as a child, Caouette does come across as somebody who desperately craves attention. But Caouette himself states that he’s always seen moviemaking as a form of catharsis, a way that he can approach difficult issues that he’d otherwise shy away from. This helps explain his methodical documentation of his own life from such an early age, though it does lead to some awkward on-screen confrontations with his family who clearly don’t feel the same about sharing locked-away emotions with the camera.

Any criticisms are easy to forgive. Tarnation is personal filmmaking at its most personal, and fans of Andy Warhol, Derek Jarman and John Cassavetes will find much to appreciate here. And all this with just $218; just imagine what Caouette could do with $220.