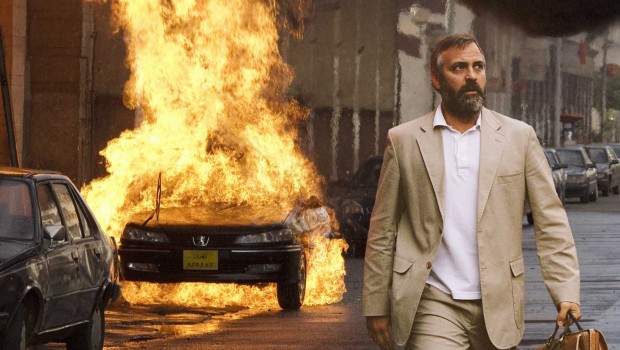 It’s encouraging to come across a film like Syriana. Ambitious, opinionated and thrilling, this is the kind of movie that almost makes you believe in Hollywood once again. And with the likes of Good Night, and Good Luck, The Constant Gardener and Crash could we be seeing a return to the intelligent mainstream moviemaking from the 1970s? Well, let’s not get carried away here – 2006 has been the year of Scary Movie 4 after all.

Suggested by Robert Baer’s book, Stephen Gaghan’s movie appropriates the overlapping storyline technique that worked so well in his previous script for Traffic. One plot thread follows veteran CIA agent Bob Barnes (a bearded, bulky Clooney), a man becoming increasingly weary with the unethical missions that he’s dispatched upon across the Middle East. Then there’s Geneva-based energy analyst Bryan Woodman (Damon), who we see taken on as advisor to Saudi Prince Nasir (Siddig) – a figure whose radical shakeup of oil contracts is the cause of some consternation for the US. Then there are the oil company executives, the terrorists and the lawyers to name but a few…

For maybe the first half an hour the cross cutting between so many characters and storylines (not to mention the complex industry jargon) does make Syriana a little hard to follow, as you attempt to piece together exactly what everyone’s personal agenda is. Yet as the disparate storylines converge everything does start to make sense (well, nearly everything), with the plot threads linking into a wider power struggle between the two Saudi princes – the result of which could determine the future of the Middle East and have a major impact on worldwide politics.

Syriana’s breathless jumping from character to character and country to country may frustrate some, but it does create a genuine sensation of a globalised world bound together by a simple commodity (“everything is connected” as the tagline goes). Like Clooney’s other recent heavyweight film, Good Night, and Good Luck, this is an unashamedly liberal-centred movie and it comes packed with prescient attacks on the US administration’s self-defeating approach to the Middle East. While you can certainly accuse Syriana of being a little idealistic at times, it does at least make you consider alternative approaches to the current ‘politics of oil’.

On a filmic level this kind of multi-narrative movie usually ends up leaving several characters and storylines hanging by the wayside – hell, just take a look at Love Actually (on second thoughts, it’s probably best not to). Syriana suffers less from this partly because it’s not really a character-based film. Sure, there are a couple of personal sub-plots woven in – Bob’s relationship with his son, Bryan’s disintegrating marriage. But for the most part we don’t know much about these characters’ lives – this is much more of a plot-based than character-based movie. Thankfully the film doesn’t feel like a lecture due to some terrific performances both from the familiar (Clooney, Cooper, Star Trek: Deep Space Nine’s Siddig) and the unfamiliar (Mazhar Munir). They make excellent guides through the potentially unfathomable narrative.

And, amazingly, Syriana works as a gripping thriller too. It may not have anything like the grainy, Mexican-set aesthetics of Traffic, but the film is both edgy and immediate with its hand-hand camerawork and unusual but always believable use of locations. Gaghan’s makes a potentially dry subject matter both informative and disturbing (the film includes a worthy addition to the canon of good movie torture scenes), and he’s aided by the excellent editing which manages to maintain a steady pace through the multiple storylines.

Can a mainstream political movie (or even a wave of them) change global politics? No, of course not. But any movie that gets you debating fundamental questions has to be a good thing – plus Syriana is a wonderfully taught movie to boot. You might need to see it a couple of times to pick up on all the intracies, but it’s worth it – in fact Syriana is worth seeing ten times. A movie that’s going to stand up as a classic in years to come.