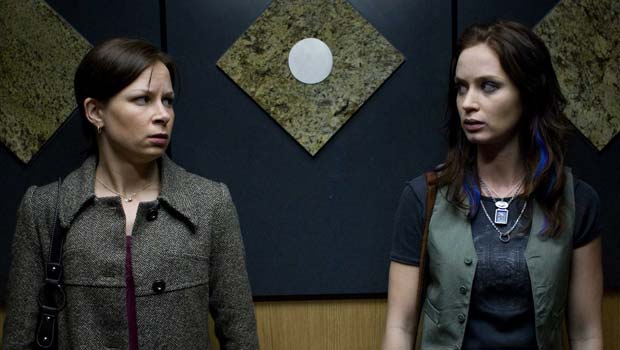 Stop me if you’ve heard this one: a man walks into a gun store, puts a shotgun in his mouth and pulls the trigger. That’s funny, right? Well no, but it’s the way that Sunshine Cleaning opens, which may slightly unsettle audience members who have come along on the promise of its jaunty trailer and shiny title. And while the film shares a handful of producers and its titular noun with Little Miss Sunshine, it’s less easy to categorise than that crowd-pleasing hit.

Central to the story is Amy Adams’s Rose, a single parent who is responsible enough to go out and create work to keep herself and her son, and insecure enough to carry on a dead-end affair with married policeman Mac (Steve Zahn). He used to be her childhood sweetheart, but no matter how hard Rose tries to convince herself, she knows deep down that Mac will never leave his wife and family for her. Rose is the most fully-drawn character in debut writer Megan Holley’s jumbled script, and Amy Adams plays her to perfection, adding a layer of darkness and insecurity to the irresistibly bright screen persona she has so far skilfully established, most notably in Junebug and Enchanted.

Sunshine Cleaning’s plot kicks off when, after being called out to the aforementioned suicide case, Mac drops a comment about the cleanup operation that gets Rose thinking (as we all surely would in the same situation): there could be good money to be made in biohazard removal. Securing the assistance of her fresh-out-of-a-job sister Norah (Emily Blunt), Rose begins promoting herself as an independent crime scene cleanup operative. With the help of one-armed hardware store owner Winston (Clifton Collins Jr.), Rose figures out how to do the job properly, and things start to take a positive turn.

Of course nothing is ever as simple as you’d hope, and this proves as true for anyone watching Sunshine Cleaning as it does for Rose, as far too many story strands begin to pile up. Emily Blunt’s Norah goes in search of the daughter of a dead woman the girls clean up after, in a sub-plot that also hints that Norah is unsure about her sexuality, but while Blunt’s performance is very good this storyline just drops from the film after a while, unresolved. The main reason it seems to be included is so director Christine Jeffs can crowbar in a scene of Norah opening up about issues involving her own late mother.

Alan Arkin is also thrown into this mix as the girls’ father Joe, giving another highly watchable performance in a very similar mode to his Oscar-winning turn as the equally irreverent Grandpa in Little Miss Sunshine. His scenes with Rose’s son Oscar are fun but feel like a distraction from Rose’s story, as she is the character we care most about.

Perhaps it is appropriate that a film about confused and mixed-up people is itself a confused and mixed-up creation. The general lack of focus in the script means that Sunshine Cleaning loses the impact it could have had with some more thoughtful editing; the excellent cast are always worth watching, but the film fails to resonate beyond their performances.

Alternative review:
“A lot of the time Sunshine Cleaning feels like it should be the pilot to an American sitcom.”
3/5 by Mike Barnard. Read more…