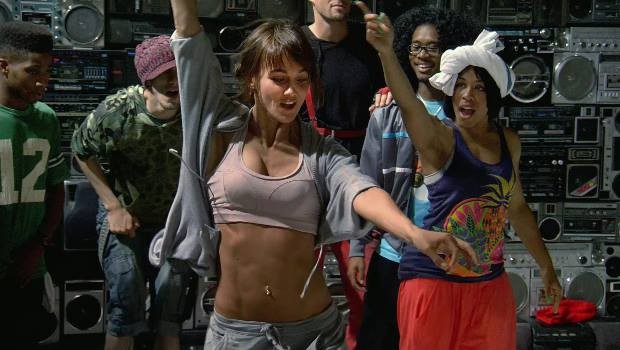 Summary: The beauty of dance films is that no-one really cares about the story.

Fashions in film go in waves, and the revival of the dance movie has been one of the more successful ones of the last year, with both our own Streetdance 3D and now the more glossy American Step Up 3D, buoyed by the popularity of shows like Britain’s Got Talent and So You Think You Can Dance?

Step Up 3(D) is the third in a series of loosely related films. Moose (Sevani) from Step Up 2 has moved to New York to begin an engineering degree at NYU. His parents are delighted that he is taking life seriously at last and has stopped messing about with dancing – thanks, foreshadowing. Moose has done nothing of the sort and on his first afternoon in the big apple manages to take on and beat a dance crew in a beautifully filmed sequence possibly inspired by Pixar’s Up, attracting the attention of Luke (Malambri). Luke, a sort of latter day, saintly Fagin, brings Moose to his home – a warehouse complex that is home to a motley band of waifs and strays drawn together by their love of dance.

Luke’s philanthropic parents acquired the warehouse space years before and he keeps it going, in part, to honour their memory, running a club night downstairs to finance it. Recently the club hasn’t been making money and he is behind with the mortgage payments; his plan (such as it is) is for his dance crew, the Pirates to win a major new dance contest, and use the prize money to pay off the banks. To this end he is always on the lookout for new dancers, and one night spots Natalie (Vinson) in the club; they soon fall in love, but can Natalie be trusted?

Plot shmot – the beauty of dance films is that no-one really cares about the story, which is lucky as Step Up 3 is as cliched as they come. It manages to combine two classic dance movie tropes, and adds a Romeo and Juliet subplot, into one film, which is quite neat, but other than that has nothing new to say in terms of the story. Where it scores is on the spectacle, and spectacular it certainly is. Even without the 3D, the dance sequences are impressive and immensely enjoyable, though I prefer Moose’s more spontaneous numbers to the big nightclub set pieces. One thing I find strange about street dancing is that it should be joyous and happy, but streetdancers have to look fierce and aggressive. In the scene where Moose and his girlfriend dance to Fred Astaire singing ‘I Won’t Dance’, there’s a real Gene Kelly feel and the same sense of pure delight in dance.