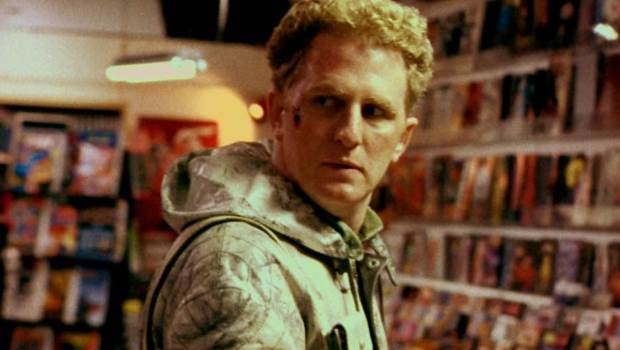 Les Franken (Rapaport), a kind-hearted but lonely Los Angeles parking enforcement officer, lives a dull and uninspiring life. He goes to work; he goes home and eats his microwave meals for one; he gazes longingly at the pretty girl (Holden) who works in the local supermarket, but is too shy to ask her out. His only pleasure is reading comics, which he buys from his friends Joey (Peck) and Everett (Baker) who own a comic book store.

So one day Les decides to do something different. He signs up for a clinical trial for a new and exciting antidepressant called Specioprin Hydrochloride. Les almost immediately starts to feel better. And then he makes the most wonderful discovery – an unexpected side effect of the drug endows him with superpowers. He can levitate, hear people’s thoughts, and even walk through walls.

Though Dr Dobson (Kehler) dismisses Les’ claims and tells him to stop taking the drugs, Les decides that it is incumbent on him to use his powers for the greater good. Resigning from his job, he makes himself a costume and hits the mean streets to fight crime, protect the world from the forces of evil, and help the innocent.

Soon Les is showing up on CCTV and on the news, and worse, he has used the ‘Special’ logo as his superhero symbol. The businessmen developing the drug, worried about the bad publicity he is bringing to their wonder-product, are determined to stop Les at all costs. But to Les’s addled mind, they are his Evil Arch Nemeses, and in true superhero fashion, he will never give in…

Special is an odd, slight film, which asks some interesting questions about our over-medicated society. Les is mildly depressed, but does he need medication, or maybe just to get a hobby and some new friends? More profound is his alienation – his work is boring, his apartment grey, his whole world is bleached of colour; this is not the glamorous side of LA – there are no palm trees here, nothing but anonymous, colourless office blocks. Les needs something – anything – to make him feel special, and once he does, he won’t let go of it, even if it is a risk to his health. Of course there are plenty of real drugs that work in the same way as ‘Special’, increasing confidence and paranoia simultaneously.

The film is darkly funny. Michael Rapaport is poignantly hilarious as poor Les, smashing into walls and standing on tip toe, convinced that he is demonstrating his new powers as people look on, puzzled and confused. As the film goes on, and Les’s drug use spirals out of control, he gets more and more painfully injured and his story becomes tragic. Of course if Les was more in control he could make an absolute fortune suing the developers of Special, especially as there’s clear evidence of medical negligence.

The film is not terribly realistic, because two blokes with no money can’t develop a drug, and the lack of budget does compromise the medical element of the film, but the other points it makes will resonate with audiences who have grown up, like Les, in a world where self-medication, legal or illegal, is par for the course.