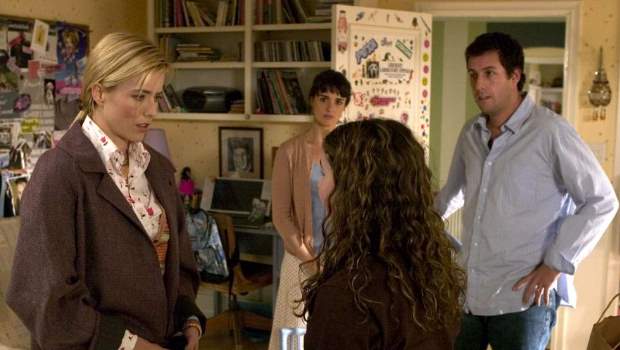 Summary: It’s never more than the sum of its parts. But its parts are pretty good, so maybe that’s enough?

James L. Brooks has won lots of awards with his films, most notably cleaning up the actor Oscars with As Good As It Gets in 1998. They also generally do well at the Box Office. So why don’t I like them? I sat stony faced through Terms of Endearment, my most vivid memory of it being the scene where Debra Winger squeezes her boyfriend’s spots; failed to be moved by Broadcast News, and was deeply irritated by As Good As It Gets. I think its something to do with a prevailing trope in American films whereby the life of a middle-class white American is somehow made richer by the entrance into their life of a sort of angel from a lower socio-economic group and often a different ethnicity. Plus I do get tired of all these roles for women in films being waitresses and prostitutes with hearts of gold…

Anyway, I polished up my jaundiced eye and went to see Spanglish, which, aside from James L. Brooks had another strike against it in that it starred Adam Sandler, who was fun in The Wedding Singer and a gormless buffoon in everything I’d seen him in since. (I should hasten to add that I haven’t seen Punch Drunk Love.) So I am pleased to say that I overcame my prejudices to enjoy Spanglish and would even go so far as to recommend it, despite a few caveats. But onto the plot.

Flor (Vega) is a wetback. That is to say an illegal immigrant from Mexico. Abandoned by her husband, she and her daughter Cristina (Shelbie Bruce) make their way across the Rio Grande to Los Angeles where for six years they live safely and happily in the Latin sub-culture of the city, never needing to deal with Anglos. But as Cristina gets older and Flor needs more money, she is forced to venture into the wider world, and goes for an interview with Deborah Clasky (Leoni), who needs a housekeeper. Deborah is a well-meaning but unhappy and neurotic woman who has recently lost her job and her way in life. Though she can’t speak Spanish and Flor can’t speak English she offers her the job and thus begins Flor’s new life.

Flor initially maintains a certain detatchment from the Claskys but gradually comes to see that below the surface gloss and middle class accoutrements (2 Jeeps, swimming pool, neglected fat Labrador) is an unhappy family that has lost its centre. Deb’s husband, John (Sandler) is a good, kind man – and a chef, hmm – who loves his family and, unusually, puts them first, as Flor does with Cristina. As Deb unravels, John and Flor, mutually sympathetic, find themselves confiding in each other and gradually becoming more and more attracted to each other. Flor also comes increasingly into conflict with Deb as Deb neglects her own daughter Berenice (Sarah Steele) who, though overweight, is a wonderful person, in favour of Cristina, who fits in better with Deb’s idea of what a girl should be. Cristina laps up all the attention and presents, and Flor rightly worries that she will have her head turned by the Clasky’s lifestyle.

Spanglish is that old fashioned thing, a good story well-told. It builds slowly and quite inconsequentially, so that it’s almost a surprise when you suddenly realise that you’ve come to care about the characters – which mirrors Flor’s experience in the Clasky house. It’s very much a domestic drama and something of a chamber piece – mainly shot in real houses – which doesn’t do or say anything earth-shattering but is just enjoyable and sometimes very funny. It helps that the kids are uniformly excellent, with both Shelbie Bruce and Sarah Steele holding their own against the adults. A stand-out scene is where Flor and John argue with Cristina interpreting – Shelbie Bruce mirroring Paz Vega’s every move and gesture and clearly enjoying herself immensely. The adults do ok though I’m still not convinced that Adam Sandler can really act – he tends to shout when trying to emote. Cloris Leachmann is good value as Deb’s mother, former jazz singer and benign drunk Evelyn, trying to save her daughter’s marriage, and Leoni hilariously sends herself up as the brittle, unhappy Deb. And Paz Vega? Well she looks great and her breasts are amazing – they seem to have a life of their own – and apart from seeming too young to be the mother of a 12-year old she’s pretty good. If there’s any justice in the world she’ll take Penelope Cruz’s place as Hollywood’s favourite Spanish hottie.

My gripe with Spanglish (apart from the fact that Deb had no need for a housekeeper when she was unemployed and her mother lived at home) is that for all that’s good about it – and it has some very good scenes and great one-liners – it’s never more than the sum of its parts. But its parts are pretty good, so maybe that’s enough?