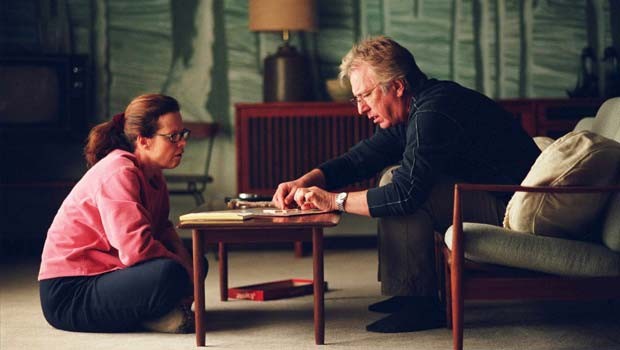 Summary: Thoughtful script and excellent performances, its one of the cinematic highlights of the year.

Alex Hughes (Rickman) just wants to be left alone. Newly released from prison, he has travelled to Canada to meet the mother of the son he never met, and doesn’t seem to be entirely sure why he’s there, in this truck stop, in the snow. And then he meets Vivienne (Hampshire), an ebullient 19 year-old hitchhiker, who needs a lift and won’t take no for an answer. Vivienne is everything that Alex is not – chatty, nosy, cheerfully irrepressible – and on the drive to her home town, Wawa, she manages to break down a few of his barriers. And then, pulling out onto the highway, they are hit by a truck and Vivienne is killed instantly.

Shocked and stranded in snowbound Wawa, Alex’s guilt leads him to seek out Vivienne’s mother, wanting to share his grief and explain what happened. He goes armed with the presents that Vivienne had picked up along the way, knocks on the door, and meets Linda (Weaver), whose reaction to his news is odd, to say the least. It soon becomes clear to Alex that Linda is autistic, though high-functioning, and she invites him to stay, because she needs him to carry out the tasks that she can’t deal with – feeding Vivienne’s dog, taking out the garbage – and help to plan the funeral.

Alex is also drawn to Maggie (Moss), Linda’s neighbour, leading to some tension when Clyde (James Allodi), the ineffectual police officer, becomes jealous and starts digging into Alex’s past.

From the plot, Snow Cake may sound moribund and a bit gloomy, but in fact its funny, quirky (in a good way) and ultimately uplifting. Unlike many films about people with behavioural disorders, Snow Cake presents Linda as a feisty, independent woman who happens to be autistic. She doesn’t have any special talents, she doesn’t need healing, she just has some odd tics, and in many ways Alex, who has been emotionally shut down for so long, is quite like her, just less extreme. His exasperation at her inability to make emotional connections is often very funny, as is his belief in some of her more wild statements. She accuses Moss’ Maggie of being a whore, so Alex, after his first night with her, offers her payment, with embarrassingly amusing consequences.

Rickman and Weaver have a wonderful chemistry and, having played together before in the hilarious Galaxy Quest, share some comic moments, my favourite being comic book scrabble, where, as Linda explains, you can make up any word you like as long as you can use it in a sentence. Linda and Maggie are polar opposites, but the interaction with both of them, and their lack of demands on him, is what Alex needs to reconnect with his feelings and begin to heal. The three leads are all superb; Rickman’s dry wit and chocolate voice, subtly registering Alex’s emotional reawakening; Weaver capturing all Linda’s oddities, but also her unique, pure take on things, unselfconsciously rolling in the snow; Moss warm and natural and looking like an amazingly lovely witch.

Filmed in the real town of Wawa, by the shores of Lake Superior, whose symbol is a giant sculpture of a Canada Goose, Snow Cake could have been annoying, but thanks to a thoughtful script and excellent performances, its one of the cinematic highlights of the year.