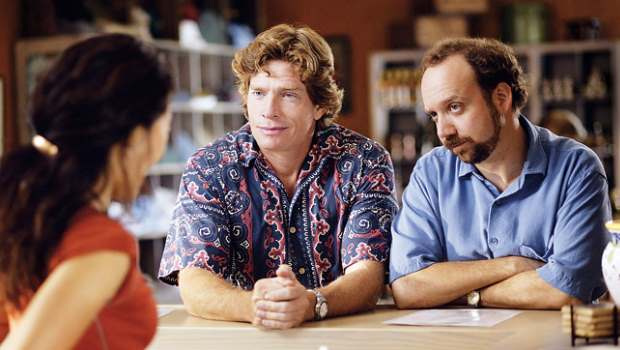 Summary: Sideways will speak to anyone who has ever thought themselves a bit of a failure or gazed into the abyss between the mountain of their ambitions and the slag heap of their actual achievements.

Sideways is a deeply pleasurable indie diversion in which nothing really happens and yet a lot is said, much of it about wine. (Which is A Good Thing.) Two old college buddies, Miles (Giamatti) and Jack (Church) set off on a road trip through wine country. Miles is a divorcee, wine-buff and would-be novelist; Jack a washed-up actor a week from his wedding day. The trip is Miles’ wedding gift to Jack, who is looking to get his last taste of single life. The two couldn’t be more different.

The film is a rich and – well, I was contemplating a wine metaphor there, but I’ll spare you – but it’s a rich character study of a kind too rarely seen these days. Payne (Election, About Schmidt) is clearly more interested in exploring the lives of ordinary men of a certain age than he is in big explosions and whiz-bang CGI.

Paul Giamatti is wonderful as sad sack Miles, whose only interest in life is wine. Miles isn’t a very nice character or a particularly good person, yet somehow Giamatti with his little pot-belly and bald patch succeeds in making him endearing, even when he’s buying the latest issue of Barely Legal. He is well-matched by Thomas Haden Church, whose craggy good looks and easy charm underpin Jack’s essential likeability, even when he’s behaving like a complete idiot.

This odd couple set off in Miles’ crappy old Saab convertible to visit the Santa Ynez Valley – Miles planning on tasting great wine, eating good food and maybe getting in some rounds of golf; Jack counting on getting laid and maybe drinking some cheap Merlot. To Miles’ surprise, both men meet women almost immediately; Jack falls passionately in lust with Stephanie (Oh) a local vintner, while Miles is drawn to Maya (Madsen), a fellow oenophile.

Of course Jack has not let a little thing like his upcoming marriage stand in the way of telling Stephanie that he loves her, and when Maya finds out she is furious with Miles as well. Jack momentarily considers calling off the wedding but one disastrous – and highly amusing – sexual encounter finally dampens his ardour and he slinks back to LA with his tail between his legs.

Sideways will speak to anyone who has ever thought themselves a bit of a failure or gazed into the abyss between the mountain of their ambitions and the slag heap of their actual achievements. It’s to the credit of the actors and the screenplay that we never despise Miles or Jack, but laugh with them and empathise with them. It’s also really refreshing to see women in a movie who are the right age to be with these men – both Oh and Madsen are extremely attractive, but they look real, they have wrinkles, they also have charm and stories to tell and a bit of life experience. Hurrah! Directors, take note.

It also looks wonderful, and if you like wine, you’ll be gagging for a glass by the end!