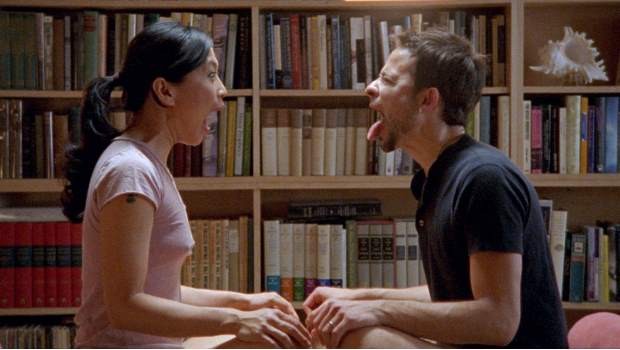 Let’s get this out of the way immediately: Shortbus has a lot of sex. And by that, I mean sex with a triple x. Man-on-man, remote control-vibrating egg, mass orgy-kind of sex. Admittedly, it’s not always to everyone’s tastes, but the camp factor is cranked pretty high. Not that this comes as a surprise. You’ve probably heard the jitter-inducing hype the film has attracted in the run up to its release. You’re also probably aware that the action is backed by a sketchy storyline revolving around – of all things – sex. And yet, word of mouth aside, Shortbus emerges as one of those style-over-substance miscarriages that arouses little more than a fatalistic shrug of the shoulders.
However, what you haven’t been told is that amidst all of the x-rated action, Shortbus hides a heart somewhere too.

Too self-pleasing to go anywhere and constrained by genre formalities that demand it to express some emotional resonance, Shortbus dives headlong into a brisk mix of clichéd melodrama and camp sex romp and it somehow doesn’t compute. All things considered, John Cameron Mitchell’s transgressive new film idolises sex to the point of reshaping it into a sexless commodity, nothing but a vehicle to emotional nirvana. In the process, we are bullied into taking its psychoanalytical endeavours seriously, as if its sex starved characters possess an underlying emotional depth we are meant to relate to.

All things considered, Shortbus packs a visceral visual wallop, but lacks emotional power. This is almost a contradiction, because emotional commitment is exactly what Shortbus aims to incite. There’s a gripping side to it, and it has nothing to do with the vaginas and penises popping up throughout. Like 9 Stories and Brown Bunny before it, Shortbus toys with the boundaries of sex on screen but never really makes a point. Mitchell would like us to acknowledge Sofia’s orgasmic eruption at the end as a metaphor for spiritual and emotional liberation. Unfortunately, it all registers as little more than preposterous waffling. Out of the good bits, the effortlessly cool soundtrack updates the notion of “music for sex” to a post-MTV, YouTube-obsessed young America and, surprisingly, it works like a charm. It is also very well acted, and the seamless integration of sex and drama goes a long way in making it rather entertaining as a whole.

All in all, Shortbus is nothing but a big budget sex film. An immaculately produced, glossily-packaged, big-budget sex film. And to be fair, its genuine intentions are more than to simply arouse and titillate. The thing is – how much you’ll care is an entirely different issue.