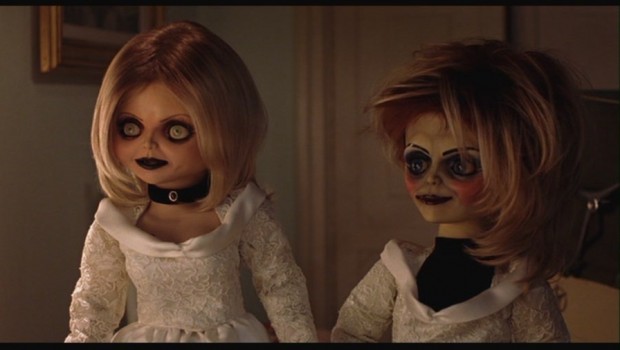 Summary: Seed of Chucky is a messy movie even if you took away the gallons of blood. Horror aficionados will love it.

The most pleasingly bonkers horror in recent memory, the fifth entry in the Child’s Play series may not be high art exactly but it does make for deliriously entertaining viewing.

This time the fiendish killer doll (Dourif again on vocal duties) and his equally homicidal bride Tiffany (voiced by Tilly) are being utilised as puppets on a movie – with the real Jennifer Tilly voicing the part of Tiffany (though there’s no real life Brad Dourif on hand to voice Chucky – this isn’t a film that works by any real discernible logic). Meanwhile their polite, placid ‘son’ Glen (voiced by Boyd) has been enslaved into a Glastonbury ventriloquist act, until he eventually manages to break free with the intention of tracking down his folks. When Glen discovers Ma and Pa lying around in a special effects studio, he brings the inanimate duo back to life with the aid of an ancient amulet. Re-awakened and re-invigorated the wisecracking Chucky and squeaky-voiced Tiffany embark on a plan to transport their souls into the bodies of the real Tilly and the rapper/actor Redman (here playing himself as an accomplished movie director). At the same time the duo also attempt to curb their ‘addiction’ to killing in order to set a good example to their sensitive son. Unsurprisingly they don’t succeed in kicking the habit.

It’s difficult to describe Seed of Chucky without making it sound entirely mad, but that’s a pretty fair representation of the movie. Taking the self-referential elements of 1998’s enjoyable Bride of Chucky one step further, this is an almost pathologically post-modern movie. Aside from featuring the real life Tilly and Redman, the film is packed with references to classic movies from Dressed to Kill to Rebel Without a Cause to Kramer Versus Kramer. OK, so the ‘post-modern horror-comedy’ bubble burst with the end of the Scream franchise a few years back, but Seed of Chucky is at least quite original with its use of irony. This is a film that sees Jennifer Tilly transformed into an opportunist slut and compulsive eater (“God she’s fat,” Tiffany moans after dragging an unconscious Tilly across the floor) while Redman becomes a sleazy, sexist pig. Rest assured, it isn’t a vanity picture.

The rest of the cast is arbitrary to say the least. After all, there can’t be many movies that would cast S Club 7’s pop-moppet Hannah Spearitt (as Tilly’s PA) and king of weird John Waters (as a snooping paparazzi) alongside each other! The highlight however has to be Billy Boyd’s inspired depiction of the gender-confused Glen (“Am I Glen…or Glenda?”), coming across as a crazed combination of Pinocchio, Oliver Twist and a camp Michael Caine. It’s the comic performance of the year so far, and helps make Seed of Chucky easily the most entertaining of the series – and a world away from the production line horror of the deplorable Child’s Play 3 (a movie which, to be fair, did contain the immortal line “Don’t f*ck with the Chuck!”).

Seed of Chucky is a messy movie even if you took away the gallons of blood. The plot veers all over the place with little sense of coherence and there’s a generous dose of obvious lines and painful puns that should have expired with the 1980s (“Drop dead,” “I’ve got a few skeletons in the closet” – you know the sort of thing). But these flaws don’t detract from the fun. Mancini, helming here for the first time after scripting the other movies, shoots with a great eye for colour and grip of genre, and he’s backed up by some inventive special effects that thankfully steer clear of a CGI offensive. And you’ve got to love a film that runs Britney Spears off the road and features a masturbating puppet in the same movie. Horror aficionados will love it.