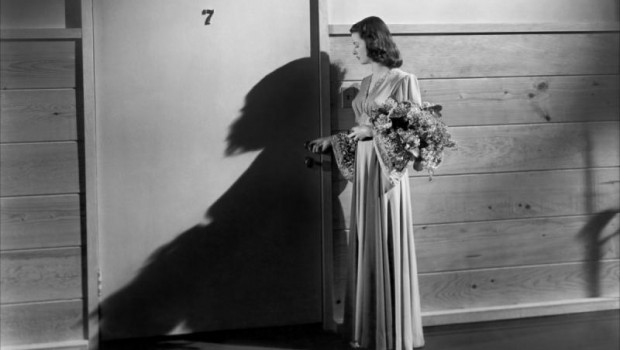 Secret Beyond the Door Review

Summary: Secret Beyond the Door remains an interesting and important part of Lang’s Hollywood years.

The rise of psychoanalysis and the experience of World War II meant that themes of psychological trauma, repression and madness frequently found their way into films of the 1940s. This could be seen in the classic noirs of the period (Fritz Lang’s Scarlet Street being one of the best examples) as well as intriguing melodramas such as Spellbound, Experiment Perilous and 1947’s Secret Beyond the Door. Lang’s film features several direct references to Freud, and explores ideas of supressed memories and the effect of death and parental relationships on the psyche.

Yet domestic bliss isn’t forthcoming. Celia finds that Mark also lives with his sensitive young son who pines after his dead mother, and Mark has a bizarre habit of styling the bedrooms of the house to resemble famous murder sites. Mark also seems to suffer from violent mood swings – affable and generous one minute, rage-filled or taciturn the next. Gradually, Celia begins to wonder what lies beyond the one locked bedroom in the house…

Despite the fairly familiar story, Lang and writer Silvia Richards keep you guessing until the fairly silly finale, and the opulent mansion setting contrasts nicely with the dark deeds that Celia suspects have occurred within its walls. As well drawing on the Bluebeard legend (itself the basis for Edgar G. Ulmer’s 1944 film Bluebeard), there are shades of other Hitchcock classics (Suspicion, Rebecca) and even Jane Eyre. The dramatic last-minute flashback would go on to become a classic giallo device 30 years later (as an aside, fans of Italian horror might recognise Bennett from her final appearance in 1977’s Suspiria).

Bennett makes for a sympathetic wide-eyed heroine, and Celia’s weary-sounding voiceover throws up a few nice lines (“This is no time for me to think of danger. This is my wedding day!”). But while Redgrave is a believable enough potential psycho, his charming/creepy performance here pales against Dead of Night’s disturbed ventriloquist.

As you’d expect, Lang crafts some striking sequences – Mark dreaming he’s on trial with himself as defendant, judge and jury; Celia fleeing through vast, shadowy corridors and into the woods beyond; Mark giving a tour of the house’s “murder rooms” to delighted guests – and there’s a dreamy opening shot courtesy of Disney.

Yet this is a film that is more about memorable moments than a satisfying whole. The movie lacks the power or surprises of Lang’s best work, missing the social commentary of M and Metropolis or the depth of the director’s previous team-up with Bennett, Scarlet Street. But for all that, Secret Beyond the Door remains an interesting and important part of Lang’s Hollywood years, and it’s great to see the film finally getting a DVD release (in a nicely remastered print, too).

Just filmographies on the disc itself, but the DVD comes with an interesting set of mini-essays that examine different aspects of the movie.