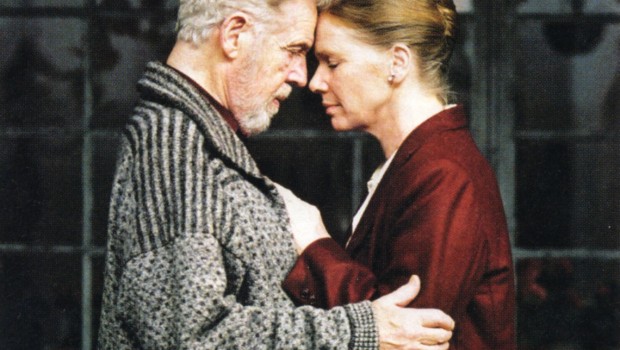 “I think a lot about death these days.”
Yup, we’re firmly back in Ingmar Bergman territory here in the 85 year old director’s self-proclaimed final film (not the first time Bergman has said this, mind). Originally made for Swedish TV, Saraband is a follow up to his 1973 Scenes From a Marriage, and examines how that movie’s central characters have (or perhaps haven’t) moved on with their lives years later.

Thirty years after Marianne (Ullman) has last set eyes upon her philandering ex-husband Johan (Josephson) she feels herself overwhelmed by the sensation that he is ‘calling’ to her somehow. So Marianne sets off to visit him at his isolated retreat and becomes caught up in Johan’s hate-filled relationship with his widower son from a later marriage Henrik (Ahlstedt). Part of the friction centres on the future of Henrik’s 19-year-old daughter Karin (Dufvenius), a talented cellist with an odd, tempestuous relationship with her father.

All of Bergman’s usual themes and preoccupations are present and correct – so expect plenty of personal meditations on death, loss, sex, pain and rage. But it’s a credit to Bergman’s unfailing power as a director that Saraband feels as fresh and powerful as any of his movies from twenty years ago. The characters’ conflicting attitudes to each other are brought to life by the four excellent leads who manage to make these figures simultaneously cruel, tortured and compelling. Josephson is particularly convincing as a man who refuses to make any concessions to anyone as he strides into his mid-eighties.

In theory the drama may appear to be quite stage bound – four actors, simple sets and lots of meaningful silences. But Bergman’s far too immersed in the language of cinema to let this simply become filmed theatre. From the story’s ten chapter structure (complete with title cards) to the crash zooms and visual flourishes (the camera pulling slowly away from Karin playing cello against a plain white background), Bergman’s identity is stamped over this movie as much as it ever was.

It goes without saying that Saraband doesn’t make for light hearted viewing. But this is a powerful, emotional family drama that can happily rank with some of Bergman’s best work.

EXTRAS
As well as the usual stills and film notes, the highlight of the DVD is a revealing ‘Making of’ documentary. Instead of the usual worthless selection of talking heads proclaiming how wonderful everyone is, this fascinating doc shows Bergman’s sprightly hands-on directing style in some of the movie’s key scenes. This is intercut with clips from a press conference where Bergman talks about his changing attitude to death since the passing of his wife, and it makes for an enlightening accompaniment to the movie itself.