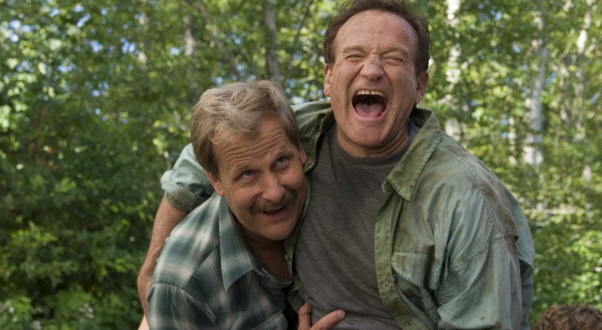 It’s a whole ten seconds into RV before we’re treated to Robin Williams laying on one of his funny voices – a Rocky Balboa-esque sock puppet to be precise. It’s another five minutes before there’s a hint of treacly music, and then a good twenty minutes more before Williams is being splattered with excrement. Hell, he might do dark and sinister now and again, but it’s still clear that Williams is incapable of turning down any excuse to play the sentimental clown.

This time he plays Bob Munro, a wisecracking but henpecked father who desperately needs to make an important business meeting in Colorado if he’s to keep his job. The problem is that weak-willed Bob is too scared to cancel the imminent family vacation to Hawaii. His solution? To rent out an old recreational vehicle and whisk his spoilt, brattish family off on a road holiday under the excuse of spending more “quality time” with them. And in the greatest/worst tradition of National Lampoon’s Vacation, their journey brings them into contact with an assorted array of oddballs, and the Munros get to learn a little about the true meaning of good old fashioned family values at the same time. Gee whizz!

When he’s at his best there’s little denying that Williams is a comic genius. The fellow has an almost unsurpassed gift for fast-talking improvised off-the-wall wackiness, and yet he somehow just about manages to stay the right side of annoying (unlike, say, Jim Carrey). But Williams is a comic genius with a lousy taste in picking movies. Patch Adams, Bicentennial Man, Death to Smoochy…the list goes on. And on. RV isn’t on a par with these atrocities, and it does feature plenty of Williams’ ad-libbed clowning (throwing ninja threats at bullies, combating a battalion of racoons) that, against your better judgement, are occasionally hilarious. But as with so many of the motor-mouthed comedian’s back catalogue, you have to endure a hellava lot of sentimentality, obvious plotting and inane crudity to get to those moments of hilarity. It’s sure hard-going being a Robin Williams fan.

Outside of Williams’ performance, there aren’t too many reasons to watch RV. Sonnenfeld’s slick but soulless movie sees Cheryl Hines pretty much reprising her role as supportive but whiny wife from Curb Your Enthusiasm, while pop moppet Jojo Levesque and Zathura’s Josh Hutcherson as the Munro kids are entirely obnoxious even when they’re not supposed to be. The always welcome Jeff Daniels also pops up as a stereotype-defying hick who mainly exists just so we can be given an affectionate homily on how we shouldn’t judge a book by its cover. Prepare to be moved to tears/throw up your breakfast (delete as appropriate).

If Williams develops the capacity to pick out a half-decent comedy script (which, oddly enough, he seems to be able to do with most of his ‘serious’ movies) then he could have at least a couple of masterpieces left in him. And while RV does have its moments, only an idiot would describe it as a comic masterpiece.

Sonnenfeld actually makes for both an amusing enlightening guide in the movie commentary. Most of the featurettes are the usual backslapping sound-bites of how great everyone is, but they do at least contain snippets of great Williams ad-libs that didn’t make the final cut.