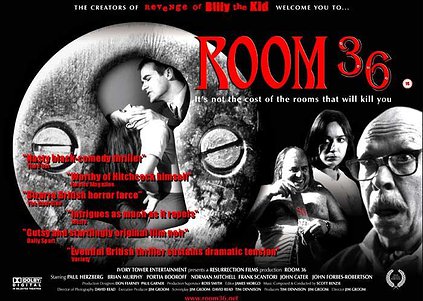 Lurid. The word could almost have been invented to describe Jim Groom’s blackly comic slice of pulp fiction. In fact it’s pretty fair to say that for the entire 90 minute running time this is a movie positively dripping with sleaze.

Room 36 arrives over ten years after Revenge of Billy the Kid, Groom’s equally filthy debut. Why the hold up? Well, a unhealthy combination of the film lab going up in flames, funds drying up, the specialist black-and-white stock going out of circulation and one of the lead actors dying mid-way through (and that’s just for starters). But against the odds Room 36 now finally sees the light of day – and the results, while far from perfect, make for an intriguing and stylish little comedy-thriller.

The Midlothian is a grubby hotel in Paddington that’s popular with cockroaches, prostitutes, gangsters and low-lives. Into this environment enters Connor (Herzberg), a professional hitman with an obsession for everything being “neat and tidy”. Connor’s holed up in the hotel waiting for the arrival of an MP by the name of Helen Woods (Booroff) with whom he plans to exchange a suitcase full of cash for an incriminating microfilm. But of course events don’t quite go to plan, and it’s not long before the walls of The Midlothian are being given a brand new coat of blood.

I suppose the nearest comparison to Room 36 would be Sin City – albeit with a fraction of the budget and a very British slant. As Revenge of Billy the Kid demonstrated, Groom has a nice sense of the grotesque that would appeal to fans of The League of Gentlemen. From the warped fairground music whittling away in the hotel lobby to the leering array of supporting characters Groom once again creates a suitably off-the-wall, uneasy atmosphere.

The film comes packed with some enjoyably larger than life performances. Herzberg makes for an amusingly cocky, hard-nosed hitman, while Booroff invests her almost-heroine with a nice mixture of the vulnerable, the tough and the just plain greedy. The real standout however is Frank Scantori, whose repulsive (though oddly sympathetic) underwear salesman is a masterclass in the monstrous.

What Room 36 lacks is the labyrinthine plot or cruel twists of fate that marked out the great cheap noirs like Detour or Kiss of Death. There just isn’t enough story here to quite stretch to an entire movie. Equally it’s a pity that the script doesn’t attempt to capture the sort of wonderfully trashy lines that defined the most memorable pulp fiction, too often content with a snarl of “Bitch!” to fuel the plot.

Still, it’s difficult to deny Groom’s a dab hand when it comes to style – Room 36 has to be one of the best-looking micro-budget British films of recent memory. The black and white cinematography (with one colour scene and a couple of splashes of red) is great, while the film is shot through with disorientating angles and doomy shadows that occassionally make you feel like you’ve been transported to another planet. The film is almost worth watching alone for the sublime shot of Connor and Woods separated by a cavity wall crawling with insects.

Room 36 isn’t a complete success. But it’s certainly never dull. Dark, seedy and mostly amusing it’s one of those films probably best caught when you stumble in drunk, dazed and slightly paranoid at about 4am in the morning. And I mean that as a compliment.