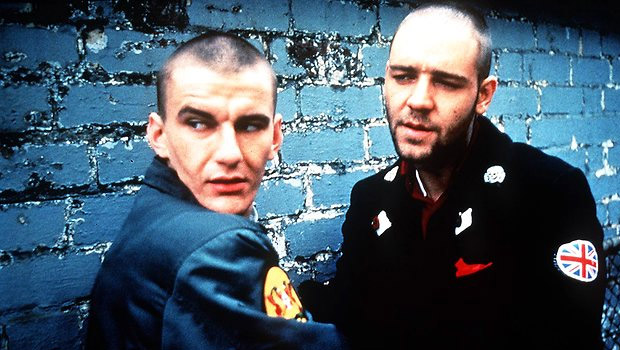 Summary: An intelligent examination of a social problem and a well structured, exciting movie.

One of the key Australian movies of the last twenty years, Romper Stomper first erupted controversially onto screens back in 1992. It wasn’t the first or last film to tackle the subject of neo-nazis of course. But whereas, say, 1998’s American History X offered easy answers to a complex problem, Romper Stomper made for both uncompromising and exhilarating viewing. And therein lay the problem for many critics. Should a film detailing such warped ideology really be so exciting to watch?

In fact Romper Stomper’s thrilling, visceral nature is its main strength. As Hando (Crowe), Davey (Pollock, who died tragically soon after the shoot) and the other skinheads clash with the Vietnamese community and defend their “territory” we are given an insight into what might make individuals turn to such an abhorrent lifestyle. This is a film that understands that a problem can’t be tackled without understanding it first. And so Romper Stomper throws us right in the middle of the gang’s daily routine and reflects both the excitement that these characters take from their way of life (witness the breathless clash between the skins and Vietnamese halfway through) and also the sense of identity that the gang offers. The gang clearly acts as a kind of surrogate family and fills a void in their otherwise meaningless lives. To the outside world they might not add up to anything, but through their xenophobic ideology they gain a pathetic sense of power and superiority. It’s no coincidence that one of the “Canberra mob” leaves to join the Navy, an organisation working with a similar, albeit far less destructive, sense of ‘belonging’.

Hando is the clear leader. He may be a vicious psychopath, but he also cares about his gang patching them up when they get hurt, putting them to bed when they pass out drunk and forming all of the decisions. Hando is also the only one who appears to genuinely believe what he’s saying. While the others are essentially only there for the violence and companionship, Hando reads up on Mein Kampt and talks of “history” and “white heritage” with frightening self -belief. It’s this self-belief that makes Hando such a compelling, unpredictable character to watch, but it is also the spark that ultimately tears the gang apart.

From the uniforms to the racist ‘Oi!’ songs Romper Stomper is a convincing depiction of subculture, and one that dares to present these figures as real, troubled individuals rather than stereotypes. The film never glorifies or condones their actions – witness the victims’ faces of terror in the opening scene and it’s clear that these aren’t supposed to be the “good guys”. It also maps the self-destruction that a lifestyle built on nihilism inevitably leads to right up to the atmospheric, violent finale.

Writer-director Geoffrey Wright’s cinema-verite style boasts a tremendous energy that puts us right in the thick of the action; it seems a shame that Wright has yet to build on this promise (his last movie was the half-successful offbeat slasher Cherry Falls back in 2000). Meanwhile the performances throughout are exceptional. In fact it could be Crowe’s best performance to date, infusing Hando with a frightening intensity without turning him into an exaggerated rolling-eyed monster. Equally outstanding are Pollock as Davey (who gradually emerges as the ‘hero’ of sorts) and McKenzie as Gabe, the abused wild rich girl who gets sucked in by this strange family, both playing characters that constantly defy expectation. Against all this is a backdrop of urban malaise so rarely glimpsed in Australian cinema.

Refusing to sanitise a difficult topic Romper Stomper is both an intelligent examination of a social problem and a well structured, exciting movie. “You’ve never seen anything like it” screamed the tagline. The chances are you won’t see anything quite like it again.

So what marks the Special Edition out from the budget vanilla release then? While there’s the obligatory filler included – you know stills (does anyone actually look at stuff like this?) and a pointless behind the scenes photo shoot – the special edition is made worthwhile by the commentary and interviews on offer. This is a film that almost demands its director to comment on it and Wright doesn’t disappoint. The commentary (for which Wright is joined by rotating members of the production team) offers some interesting insights into the making of the movie with some explanations of what was trying to be achieved. But it’s the interview that proves to be really fascinating. Talking over issues ranging from Daniel Pollock’s untimely death to the strong accusations made against the movie his comments are always interesting. There are also some fairly enlightening interviews with the other cast members including the now-stratospheric Crowe, though there’s no ‘Making Of’ documentary or deleted scenes alas.